The ex-girlfriend of accused killer Aaron LaDaniel Lyons testified at his trial Wednesday that he confessed to the murder in her presence.

Sonya Ewell, of Texas, testified that during her relationship with Lyons, which lasted from November 2011 to February 2014, they spoke extensively about Lyons’s involvement with the murder of a man in Brookhaven.

Lyons was indicted Sept. 3, 2014, in connection with the death of John Deere on Jan. 16, 2004. Deere was shot three times outside of his convenience store, Pik & Pak, on Highway 51 in Brookhaven. Lyons was charged with one count of  murder, one count of armed robbery and one count of conspiracy. Lyons pleaded not guilty at his arraignment on Oct. 4, 2014.

Dispute of Ewell’s testimony arose over her acknowledgement of their relationship as a common-law marriage in the state of Texas. Lyons’s council sought to bar Ewell’s testimony on the grounds that the information shared between the two was protected by spousal privilege. Spousal privilege protects an individual from being called to testify against their spouse. 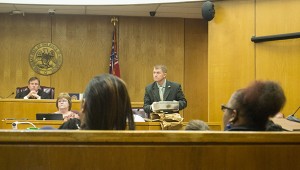 Photo by NATHANIEL WEATHERSBY
John Whitaker holds the burned cash box found on Exit 24 that was taken from the crime scene at Pik & Pak.

After a recess and much discussion between the two sides and Circuit Court Judge David Strong, Ewell’s testimony was allowed.

Ewell said that on a drive to Brookhaven for the Christmas holidays in 2011, Lyons pointed out to her in passing the store formerly owned by John Deere, saying, “That is where it happened.”

Ewell was released from questioning after saying that Lyons told her he killed a man in Brookhaven but did not tell her the victim’s name.

Another witness brought forth by the state was district attorney of the 14th Judicial District, Dee Bates. Questions from both sides focused on the dismissal of the charges and case against Kenneth Baggett, the first man to be indicted in connection with the 2004 murder.

Baggett was arrested in June 2004 for the murder of Deere and was later indicted by a grand jury, but Bates said there was not enough evidence to move forward with a case against Baggett.

“We had statements but no physical evidence,” Bates said.

Other reasons for Baggett’s dropped charges included statements made by the Lincoln County Sheriff’s Office, under the leadership of James Wiley Calcote at the time, according to Bates.

Questions for Bates from Lyons’s council focused on allegations that witnesses in Baggett’s case were coerced into sharing information by the use of “heavy-handed tactics” from an authority figure involved with the case. Further questions about who may have done so revealed that Bates knew of no one using such tactics to get witness information.

Strong dismissed the jury as the conversation about Baggett’s case drew on.

“The Baggett case was dismissed. We’re not going to re-litigate the case,” Strong said to Bill Goodwin, Lyons’s defense attorney. “There has to be a stopping point.”

After the jury returned, Goodwin asked more questions about statements from subsequent interviews with witnesses and about a hair follicle found that could not be linked to Baggett. The state’s closing questions with Bates sought to reinforce that Bates was performing his duties at the time as best as he could.

Evidence from the crime scene, including pictures of Deere’s body, a pair of FUBU pants, clothes and the cash box from the store, were brought forth during the testimonies of Lance Falvey and John Whitaker. Falvey was a Lincoln County investigator in 2004, and Whittaker was a narcotics investigator at the time.

Also called to the witness stand was Steve Byrd, who worked in the firearms section in the Mississippi Crime Lab in Jackson in 2004. Byrd testified as an expert in firearm identification and identified the bullets and casings found in Deere’s body and at the crime scene.

Others testifying included Shirley Newman, Deere’s wife, who described how they would transport the cash box between the store and their home day-to-day.

Victor Fairburn served as a volunteer firefighter in 2004 and testified to finding the burned cash box on Interstate 55 at Exit 24 on the ramp. Also found at that exit were the jeans and clothes admitted into evidence. The state believes those clothes belong to Lyons.

Called in as another expert witness was Steven Timothy Hayne, who testified to the injuries that led to Deere’s death. Hayne said Deere died of three gunshot wounds: two to the back and one in the back of the neck.

The last witness called Wednesday was current Sheriff Steve Rushing, who worked as a LCSO investigator in 2004. Rushing was questioned about the transportation of evidence between LCSO, the Federal Bureau of Investigation and the testing laboratory in Jackson.

The case is being prosecuted by Jim Giddy and Larry Baker, special assistants to the Attorney General. Lyons’s defense includes Goodwin and Leeann Slipher.

The trial will resume Thursday.

For famed trial-lawyer-turned-convict Dickie Scruggs, the worst part of prison wasn’t the fear of violence or being isolated. It was... read more