Prayers for Kaley – Cancer victim leaves legacy of inspiration behind 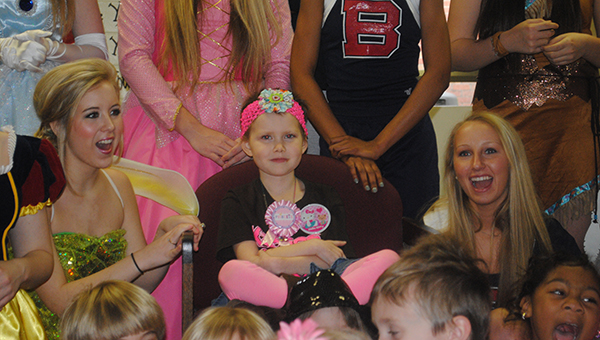 File photo
Kaley Wilkerson celebrates her 7th birthday party with all of her classmates at Mamie Martin Elementary School. During her long battle with cancer, Kaley Wilkerson inspired all those around her with her perseverance and positive attitude.

Those close to Kaley Wilkerson say the tender-hearted 8-year-old met everyone with a smile and sweet demeanor, very much like the princesses she loved to emulate.

Wilkerson died Tuesday night after a brave fight with brain cancer. In the past couple of years, the Brookhaven community and others have come to know and love Kaley — her Facebook page “Prayers for Kaley” has about 80,000 likes.

Kaley’s parents, Jessica and Joshua Wilkerson, said Kaley was a very sweet girl who liked planting flowers and playing outside, “playing princess” and cooking in her play kitchen.

“There is comfort in knowing she will never suffer another moment,” her parents wrote on Facebook early Wednesday morning. “She fought a long time, and that’s over now. We are so happy for her but are heartbroken at the same time.”

Kaley was embraced by the community and supported through her struggle by several memorable moments, including the designation of “Kaley Day” for her birthday at Mamie Martin Elementary School, and the subsequent construction of a dream playhouse built by Brookhaven Technical Center students.

“It started with a playhouse, and it turned into something that was beyond anyone’s beliefs could ever be,” said Rob McCreary, principal at Mamie Martin. “It started as a school-wide thing and became a city-wide effort.”

He said donations to the project were so much that they ended up exceeding the costs of the pink playhouse and the extra money was given to the Wilkersons. He said one of the greatest moments was when the students who built it presented it to Kaley.

“The look on her face and on those boys’ faces when they delivered it to her was unbelievable,” McCreary said.

McCreary said Kaley’s battle and the support of her schoolmates, as well as the entire Mamie Martin family, has bonded them together closer than he ever thought they could be. He said since she started in kindergarten, not too long after brain surgery, Kaley’s strength inspired and encouraged many.

“I think she’s bonded us together as a group. It might’ve begun just to help her, but she’s helped us more than we helped her,” McCreary said. “That kid inspired me more than I will inspire any kid that I know. The strength she had, you could tell some days it was everything she had just to be here. But that was her, she wanted to be here. She loved her classes and her teachers and her friends.

McCreary spoke about Kaley’s love for reading, and the special bond she had with Ellie Phillips, a favorite teacher of Kaley’s and one of two who visited her at  home to work with her this past year as her health declined.

Phillips said Kaley was always doing whatever she was supposed to, always smiling and stood out because she was so nice to everybody. She said she and Kaley had a strong bond, and her favorite thing about her time at school might have been being in her lap.

“Kaley and I bonded quickly. She knew my daughter had also suffered through terrible treatment and having no hair,” said Phillips, who spent a year at St. Jude with her daughter. “My daughter came to the school several times and would tell the class about when she had been sick and bald. The kids loved Kaley. She was kind and loving and the class was very understanding and concerned about her.

“One highlight last year was when the entire school put on a huge celebration for Kaley’s seventh birthday,” Phillips said. “Kaley loved princesses, so we had princesses come. The mayor came, and most of Kaley’s family was there that day. It was a huge success.

“Kaley will leave a hole at our school and in the community,” Phillips said. “Everyone loved her. She was always smiling. Kind and so, so sweet — angelic.”

“How we all love this precious princess,” Deborah Brady, counselor at Mamie Martin, wrote Wednesday. “Kaley was my hero. She was brave and strong. Her smile lit up a room. Her family is such a testimony to all of us. We at Martin will miss her, but our lives are better for having known her and for knowing her family.”

“Take it moment by moment” are Kaley’s mother’s words to parents going through similar situations. “Lean on the Lord for strength — I didn’t really have any on my own.”

“We want to share how grateful we are for the community and Brookhaven School District and the friends, family and members of our church, Bethel Temple,” she said. “Everyone has cared so deeply for us, and I don’t know what we’d do throughout all of it without everyone helping.”

The ex-girlfriend of accused killer Aaron LaDaniel Lyons testified at his trial Wednesday that he confessed to the murder in... read more