The West Lincoln sister act of Katy and Kara Clark have been named to the Mississippi Association of Coaches All-State Tennis Team.

Any athlete named to the team must be a state tennis champion or runner-up. The Clark twins captured Class 2A Individual Championship gold in doubles for the second year in a row in May.

The defending state champions went into the state individual tournament ranked as the No. 1 girls’ doubles team in Class 2A. 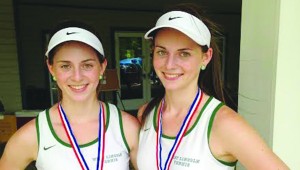 “First of all, I am extremely proud of Kara and Katy,” Brumfield said after their championship win. “I can’t tell you how many people at the state championship told me how impressed they were with the way the twins act and play.

“They are the epitome of the model student-athlete on and off the court,” said Brumfield. “Not only are they great tennis players, they are great young ladies as well. They have class and sportsmanship wherever they are.”

The duo was the 2013 state runner-up in Class 1A as eighth graders. In 2014, the girls captured West Lincoln’s first state championship gold in tennis. The girls repeated as state champs in girls doubles this year.