Following the beat across the world 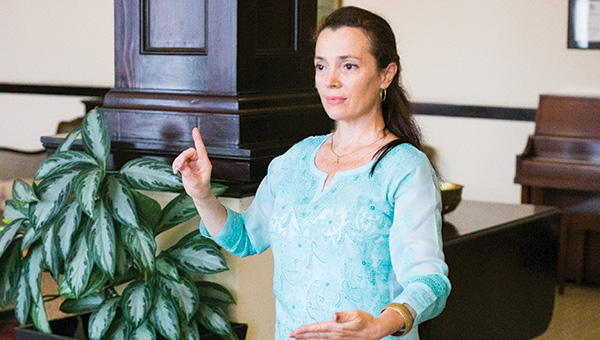 Julie Williford uses her Ghungroos when practicing, performing and learning the classical Indian style of dance Kathak, which means “to tell a story.” Ghungroos are bells that are tied to the ankles of classical Indian dancers and serve to help the audience hear the complex footwork of the art form. Ghungroos are also associated with stars.

She followed the sound of the instrument all the way to India.

Although Julie Williford now lives in Mumbai, she is currently visiting her parents, Ed and Sallie Williford, in Brookhaven

When she heard the sound of the tabla, a percussion instrument popular in Indian music, she felt an immediate connection.

“I’d been exposed to it in an Indian restaurant, and I just loved it, it kind of blew me away,” Williford said. “I got some of that music from the owner of the restaurant, and I would listen to it all the time.”

She was living on a farm in Sebastapol when she saw a flyer on the door of an Indian grocery store in Jackson for a classical Indian singing and tabla workshop at Millsaps College. When she delved into the six-week course to explore her passion for the music, she said her life took a turn. She did very well in the class, and after talking with her teacher she found herself expressing interest in visiting India. 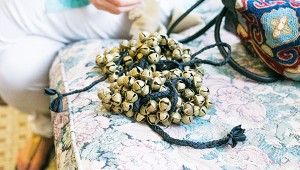 “I had always felt very connected to India, just throughout my life from a child onward,” Williford said. “Things that I felt really attracted to I always found out they were made in India, and it was something there that was very easy for me to connect with.”

Williford grew up with a love for singing, and when she met her vocal teacher, she said, she felt close to him instantly. Williford said at this point she consciously allowed her life to change and followed her calling to Mumbai, India to learn the classical art form.

Williford has lived in a suburb of Mumbai as a student of the musical arts since 2008. Originally setting out to learn singing, she lives close to her vocal teacher and his wife, in a setting she says feels familial. Williford studies in a traditional training process called guru shishya parampara – the words for “teacher,” “disciple/student” and “tradition.”

“It’s a very special thing to get to learn that way, it’s the tradition,” Williford said.

She learns one-on-one with her guru in a process that can take years. Williford decided to pursue dancing, another respected Indian artform interwoven with the music she learns. She studies kathak dance, one of six classical styles of dance, in a proper school with examinations and classes. Kathak belongs to northern India, and emphasizes the telling of stories with the help of mime and body technique.

The style of dance is very deliberate, with every gesture, movement and even facial expression being expressly meaningful and important. All embellishment revolves around one central rhythmic beat, and includes spoken word, mathematical aspects and repetition in an intricate, beautiful display.

She visits her parents in Brookhaven every couple of years or so. She performed what she had prepared for a recent examination for her parent’s coffee group when she was last in Mississippi two years ago.

“They pull on everything, [these arts are] wonderful tools for developing yourself,” Williford said. “In the Indian culture it’s understood that these kind of classical arts were given to us from the gods. So they’re for our spiritual development, our physical development, our mental development — all of our development and for our kind of liberation, as they see it.”

Though the process of learning classical arts is an ongoing, life-time calling, Williford is sort of in the final stage of her learning with her guru. Williford said her teacher would like to see her become a teacher of the respected form of art as well.

“In the classical arts there’s an aspect of it that is about giving back and teaching and sharing what you’ve learned,” she said. “They’re ancient arts, they want it to stay alive and flourish. I do have that growing feeling in me of sharing it, whatever that means, performing or teaching.

“It’s all really beautiful,” she said. “It’s been a very interesting turn in my life.”