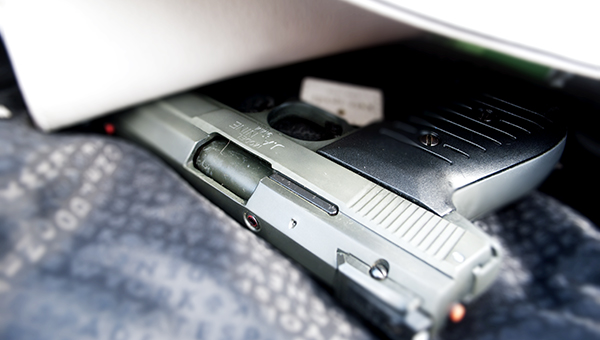 Beginning July 1, individuals will be able to carry a weapon in a purse or similar bags without a concealed weapon license.

Many new state laws will take effect come July 1 but those concerning texting and driving, special-needs education, concealed weapon carrying and the farewell to inspection stickers are among the most prominent.

On July 1 Mississippi will join the other 46 states that have banned text messaging for all drivers. House Bill 389 prohibits drivers from writing, sending or reading text messages, emails or social media messages, setting a $25 fine until July 1 2016 and $100 from then on. Governor Phil Bryant signed the bill on March 13, after a similar bill was killed before it got to him in 2014.

Advocates cite studies that have found banning hand-held wireless communication devices while driving saves lives. Some who spoke out against the bill state that it infringes on their rights.

“It’s not about my right to text and drive its about those people I share the road with,” said Sen. Sally Doty, R-Brookhaven.

Doty said she was very much involved in getting the bill passed this year after working hard to pass it in 2014. Doty said she was not on the highway and transportation committee that worked on the bill, but worked closely with the committee’s chair Willie Simmons.

“Believe it or not this was a very controversial bill,” Doty said. “A lot of folks believe somehow that it infringes on your rights, that if we pass this what’s next? What about people eating hamburgers, what about people putting on lipstick?

“We wanted people to understand that texting and driving is a lot different than those other things because it is the combination of having your fingers on the keyboard and looking down with your eyes and your mind thinking about it. It’s the combination of those three factors that really makes it so dangerous.”

Opponents of the bill cite a question of enforcement, though 46 other states are working to figure it out.

“It’s not like a trooper is going to be looking at you and saying ‘Oh she looked down,’ no,” Doty said. “No, it’s when you exhibit signs of reckless driving. When you are weaving or when you are going an odd speed […] used to that was a signal of a drunk driver, now it’s a signal of someone who’s probably texting or on their phone.”

“A lot of the same thing was said about the seatbelt law. Mississippians in my opinion are pretty law-abiding citizens. If it’s the law, most people abide by it,” Doty said. “There’s such great compliance with our seatbelt law now and it really has saved lives, and I think there will be compliance with this texting and driving law.”

Rep. Becky Currie, R-Brookhaven, voted against the law, while Rep. Bobby Moak, D-Bogue Chitto voted in favor, not without a little guilty hesitation, he adds.

“That was kind of a hard one for me because I’m bad guilty of it,” Moak said, laughingly. “And I need to get over that and stop that, it’s dangerous. It’s dangerous to text and drive and that’s one of those things where you lay your personal feelings aside and say ‘That’s just the right thing to do,’”

Senate Bill 2394 means that some Mississippi women could be packing more than peppermints in their purses as it includes language allowing concealed carry of a gun in purses and similar bags — without a state-issued permit.

Per a law the Legislature passed in 2013, Mississippians can carry weapons that are openly visible without a permit, but the state still requires a permit for concealed carry. The bill originally only reduced fees for concealed carry permit fees from $100 to $80, though was expanded to allow for concealed carry of a gun in “a purse, bag, handbag, satchel or other similar bag or briefcase or fully enclosed case.”

Currie voted to pass the handgun clarification and said in April after the legislative session ended that she was glad the bill passed.

“It’s something that’s never been spelled out before,” she said.

Moak and Doty also voted in favor of the law. Moak said while he voted representatively, he is wary of possible implications and thinks the law should be taken with caution.

“You can put a gun in a Wal-mart bag and you’re going to be within the law,” Moak said. “The guys that I’m around in Bogue Chitto, everybody’s a gun owner and everybody’s all about the second amendment — and that’s all good. Those aren’t the guys I’m scared of putting a gun in a Wal-mart bag [and being around a bunch of people]. Those aren’t the ones I’m afraid of. Even though I voted for that piece of legislation I’m very cautious on what the outcome might be down the road.”

House Bill 2695, also known as the Equal Opportunities for Children with Special Needs, was signed by the governor on April 16. The act creates a “pilot program for the equal opportunity of students with special needs for the purpose establishing education scholarship accounts (ESA) for parents of eligible students.” The program provides ESAs, or vouchers, for up to 500 special-needs children to supplement resources not or not always available in public schools alone.

Vouchers provide parents $6,500 to purchase tuition at an eligible private school, therapies, curriculum materials, transportation, testing supplies, textbooks and tutoring services. Funding for the vouchers is to come from the state’s general fund, not from the school district or the Mississippi Adequate Education Program.

The program starts this year with 500 students, the first 250 applications are reviewed on a first-come first-served basis and remaining eligible applicants are placed on a waiting list with a random selection process. The program will increase by 500 students each year for five years, at which point the legislature must reauthorize it. The application period runs from July 1 to 10. Requirements are that applicants must be residents of Mississippi; students have an active Individualized Education Program within the last 18 months; and parents must sign an agreement to adhere to rules of the program.

Sen. Doty said before the vote she personally could not decide what she thought, not wanting to do anything to hurt public education.

“I was grocery shopping one night at Walmart and ran into a teacher who teaches in the Lincoln County School District,” Doty said. “She said ‘Let me talk to you about that. I am a teacher and I support public education but I have a special needs child. He goes to school, […] but they can’t teach him the types of skills he needs.’ He was autistic. She said ‘If I could send him to Magnolia Speech School they can work with him on dressing himself and feeding himself whereas we can’t do that in a school setting, and I cant afford to do that.

“ ‘So if I had this voucher, it wouldn’t cover all of it but it would really help us get him in that school for a few years and then hopefully we could come back to regular school.’ So it really made sense to me then, I hadn’t really talked to anyone,” Doty said. “I think our school system does a great job of meeting special needs but there are just situations that are different, and parents need that flexibility.”

Proponents say that any program to improve the state’s less-than-stellar graduation rate for special-needs students should be implemented. Some opponents feared the bill would take away from public education or held that it was not enough to make a difference. Others, like Moak, voted against the bill in favor of a different solution.

“I voted against that particular piece of legislation [because] we had an alternative amendment, supported by parents and the autism association,” Moak said. “There were hearings held on that legislation and the amendment we had — it did not force children out of the public school system. If someone takes the voucher you’re out of the system.”

Moak referred to an amendment posed by Nick Bain, D-Corinth, which failed by a vote of 59-56. Other amendments were offered but only one concerning parents of the pilot program reporting expense receipts to the Department of Education.

“Many of us were troubled that this measure may open the door for further draining of our public school funds,” Bain wrote on his website. “Several amendments were offered, among them mine which offered an array of enhanced services for children with special needs and their families, including a fund to provide therapy, equipment, tutoring, respite care, and a whole range of other services to supplement services the child might already be receiving. All students, whether in public, private or home schools would have been eligible to receive the funds.”

Currie voted in favor of the voucher bill. Governor Bryant was fully supportive of the measure as it was passed.

“Today is a good day for parents in Mississippi,” the governor said in a statement, after the approval. “Special needs students deserve the opportunity to succeed, and this bill gives parents the power to provide additional resources to help their children obtain the education and support they need.”

Another notable change in the code deals with something Mississippi citizens can remove from their yearly to-do list. House bill 982 which repeals the Mississippi motor vehicle safety inspection law was signed by the governor March 28.

As of July 1, Mississippians are no longer required to go get safety inspections and the stickers they came with. Proponents of the repeal say it’s an outdated requirement and the fees do not cover the costs of the program. Sen. Doty said reasons the stickers were nixed are that the program either cost money or did not earn very much, was not considered very effective and was an inconvenience to taxpayers.

“Two or three years they have tried to get rid of it because a, it’s not a moneymaker for the state; b, its really not complied with; c, it’s burdensome on our citizens,” Doty said. “It’s hard to find stations that will do it because it doesn’t really make any money for them. […] It just seemed to be a regulation that really wasn’t helpful, and so if we have something that’s really not working, lets get rid of it.”

Moak, Currie and Doty all voted to eliminate the stickers.

“[That has] just been a long time coming, a lot of our local guys enjoyed doing that,” Moak said. “There was just enough momentum there it just finally got taken out.”