Roberson said the highlight for him was being able to participate in a mock trial as a defense lawyer. 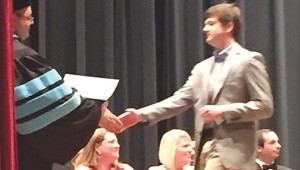 Reid Roberson picks up his certificate at the end of Governor’s School. Roberson, a rising senior, also attended Boys State this summer.

“It was pretty interesting,” he said. “A judge we elected ran the court.”

He said it differed from his high school experience in mock trial because it followed a case through the whole process. Most mock trials just involve the actual trial. At Boys State, Roberson was able to go through preliminary hearings and appeals.

Although Roberson learned a lot on the trip, he said he wished he had prepared better for the elections. He ran for secretary of state and lost.

“I didn’t know I needed to make posters beforehand,” he said. “You have to prepare yourself for it if you’re wanting to run for a position.”

Governor’s School is an honor’s program that involves a blending of formal and informal learning which often results in more autonomous and self-reflective learners, according to MUW’s website.

Roberson said he studied programming while there where he was able to learn to program apps.

“It was actually my second choice,” he said. “When I got into the programming class it was a lot more interesting than I thought it would be.”

Roberson said a group of five people brainstormed their ideas for the app and landed on what they named Car Finder. The app saves the location of your car when you park and then navigates you back to your car when youÕre ready to return.

Roberson said the camp also worked to develop camaraderie between the students.

“We played games and divided into teams,” he said. “We had a shaving cream war and made cardboard boats that we raced in the pool.”

He said Governor’s School was a great opportunity for him to step out of his comfort zone.

“At first we were skeptical,” he said citing the socials such as the toga party. “Go in with an open mind. A lot of it is stuff you wouldn’t normally do.”

From education to social, Roberson said his summer has been full of great learning experiences to help him as he pursues his dreams. Currently Roberson is leaning toward studying aerospace engineering at Mississippi State after high school graduation.

A new gardening club seeks to create a larger community of beautiful yards, starting with the recognition of two outstanding... read more