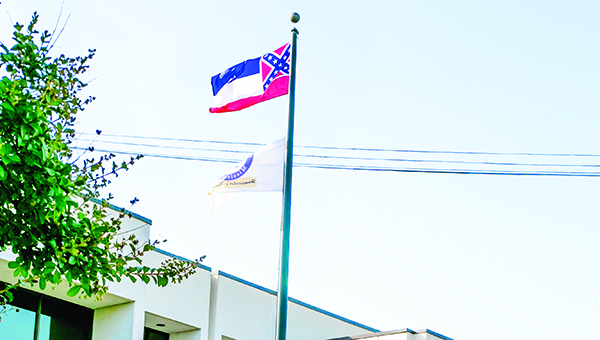 Photo by Kaitlin Mullins
The Mississippi flag has come under fire for bearing the Confederate emblem since the Charleston shooting. State officials are split over whether or not to replace the flag’s design.

Reeves, who presides over the state Senate, spoke about the issue a day after Republican House Speaker Philip Gunn called the emblem offensive and said the state flag should change.

Mississippi voters decided by a 2-to-1 margin in 2001 to keep the flag that has been used since Reconstruction, with the Confederate symbol in one corner. Republican Gov. Phil Bryant has said he supports those election results.

Debate about the flag rekindled after last week’s massacre of black worshippers in a South Carolina church.

“The same discussion South Carolinians are having now is one that Mississippians had 14 years ago when nearly two-thirds of our state voted to keep our current flag,” Reeves said in a news release. “If the citizens of our state want to revisit that decision, and I am sure at some point we may, it will best be decided by the people of Mississippi, not by outsiders or media elites or politicians in a back room.”

The Commercial Dispatch newspaper in Columbus ran a front-page editorial Tuesday, saying the state flag should change and the Confederate symbol “represents a disgusting period of our history.” It was accompanied by a large image of the current flag, with a black X drawn over it.

“Agree or not, for some in our state it is a symbol of hate, a reference to a time when Mississippians felt so strongly in their state’s right to own blacks that they took up arms to defend that right,” the editorial said.

The Mississippi NAACP, which pushed to change the flag in 2001, is calling again for a redesign that eliminates the Confederate symbol. In a statement late Monday, the civil-rights group referred to photos of the man charged in the Charleston slayings, Dylann Storm Roof, holding the Confederate battle flag.

The NAACP statement said “the images of him with the Confederate flag demonstrate why Mississippi needs to make sure symbols of our state’s ugly history are never promoted or celebrated.”

The state Supreme Court ruled in May 2000 that the 1894 Mississippi flag lacked official recognition because when state laws were updated in 1906, sections dealing with the flag and the state coat of arms were not put into the new code. Democrat Ronnie Musgrove, who was governor in 2000, created a 17-member flag commission that held a series of public hearings, some of which degenerated into shouting matches between flag supporters and opponents.

The April 2001 ballot had two options: The 1894 flag, or an alternative that replaced the Confederate emblem with circles of 20 stars to represent Mississippi’s status as the 20th state in the union.

The 2-to-1 margin to keep the flag roughly reflected the white-to-black balance of the state population, and with few exceptions the 1894 flag prevailed in majority-white precincts, while the proposed new flag was favored in majority-black precincts.

Photo by Nathaniel WeathersbyChildren got tricks and treats during a magic show at the Lincoln County Public Library Monday afternoon. read more