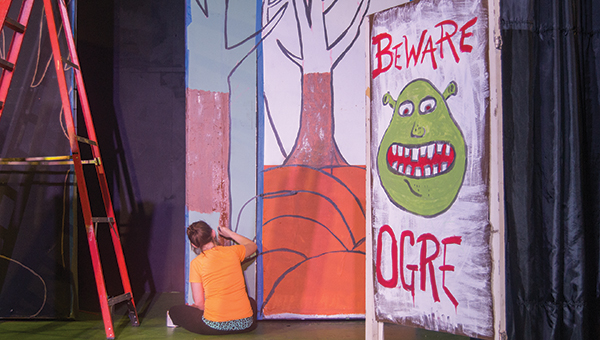 Photo by Nathaniel Weathersby
Jessica Redd paints a tree on the BLT stage in preparation for the BLTeens preparation of the “Shrek Jr.” Redd got involved with BLTeens in high school. Now, at 21, she has come back to help out with the month-long prep and production.

Deep in the bowels of Brookhaven Little Theatre, teenagers are building the Kingdom of Far Far Away on stage for this weekend’s production of “Shrek Jr.”

The show features the work of approximately 48 teens, the biggest cast BLTeens has ever had and will feature performances Thursday through Saturday at 7:30 p.m. and Sunday at 2 p.m.

BLTeens is an idea born from the theatre’s realization that there was a new group of individuals who were too old for the theatre’s drama camp and too young to get really involved with scheduled productions. Since 2010, every summer in the month of June young people between the ages of 13-19 come together to craft, put together and perform an entire production.

Director of the “Shrek Jr.” production Jana Russell said they start at the beginning of June and perform at the end of June, giving them four weeks – about half of the prep time of other season productions – to pull together a full production.

“So it’s pretty intense, but we’ve got a lot of talented people in this area,” Russell said. “Every school in Lincoln County is represented this year.”

She said teenagers involved with the production came not only from Lincoln County but also from Copiah and Lawrence counties. Productions from past years have also featured teenagers from Franklin and Pike County. Russell said that depending on the roles within the production, actors may range from ages 12 to 20.

Jessica Redd has helped with BLTeens for four years with her involvement beginning as a student in Russell’s music class at Loyd Star Attendance Center. Now 21 years old, Redd keeps coming back to help with set construction and other areas of the production.

“It’s mainly kids sharing on Facebook,” Redd said about how the theatre recruits teenagers for the BLTeens productions. “It’s everybody just spreading the word”

Many of the teenagers come in through having participated in the drama camp the theatre offers every July for children in grades one through six. Russell and Redd both said that many young people come to have the theatre experience as well as to get community service hours when they help out with set construction and prep.

“When you can get on stage in front of 300 people and have fun under that kind of pressure, that carries over. You can handle any job interview,” Russell said about other benefits for the teens involved. She said they’re also introduced to culture and fine art.

Thomas Rials recently graduated from Copiah-Lincoln Community College and while seeking a way to keep up his singing after leaving the school’s choir, he acquired the role of Donkey in “Shrek Jr.”

Brought in by his friend, Emmett Johnson, who has been involved with BLTeens for three years and is cast as Shrek, Rials originally tried out for the role of the Mad Hatter but was cast in a much larger role.

“It’s really become a home away from home for me,” Rials said.

With doors opening tonight at 7:30 everyone involved with the BLTeens production of “Shrek Jr.” is working hard to get it perfect for their audience.

For every problem, there is a solution. A 58-year-old Bogue Chitto woman credits God for the vision of a new... read more