For every problem, there is a solution.

A 58-year-old Bogue Chitto woman credits God for the vision of a new invention that is now becoming a reality.

Gwendolyn Smith takes her 97-year-old mother-in-law, Elsie Smith, out on the weekends to go shopping, out to eat or to church. Gwendolyn said it was becoming really difficult to carry both her and her mother-in-law’s stuff around so she turned to prayer.

“I said ‘Lord, for every problem there is a solution, and you’ve got to give me a solution to this problem that I have,’” she said. “’Cause my mother-in-law, she’s sweet I love her but it’s a struggle when you have to try and do all these things [without enough hands.] So what the Lord gave me was this basket.” 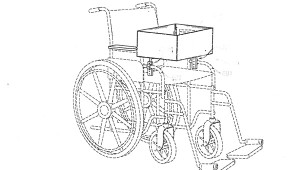 Illustration submitted
Gwendolyn Smith shared drawings of her patent-pending invention, a multifunctional wheelchair basket. Smith said the vision for the invention came from the Lord when she asked for help when visiting and going about town with her 97-year-old mother-in-law.

Smith had the idea for a multi-use basket to be attached to a wheelchair. The basket assembly attaches to front of the wheelchair, and can swing outward either right or left. The basket can be unfolded to be used as a desk

Her invention, currently as a wheelchair basket assembly, is in the process of becoming a physical prototype, thanks to a team of resources she sought out with much success. Her invention is patent-pending thanks to the United States Patent and Trademark Office’s Pro Bono Programs in association with the Federal Circuit Bar Association. Smith was accepted into the FCBA Regional Patent Pro Bono Program’s Inventor Assistance Program, which matches volunteer patent attorneys with low-income inventors to help make sure that no good invention remains undiscovered because someone cannot afford an attorney’s services.

Smith said those with the program told her when she was applying that not everyone is considered eligible. The invention must be something that would benefit people. After she expressed her idea for what she calls a “very special basket for very special people,” the program set her up with an attorney in Texas. Currently there are no volunteer attorneys listed with the federal program in the state of Mississippi, so Smith traveled to Houston, Texas, to meet with the offices of King and Spalding.

Smith’s journey led her to the Brookhaven-Lincoln County Chamber of Commerce, where she said Garrick Combs helped her and arranged a meeting with someone from the Mississippi Development Authority. Together they found a manufacturer, William Hoge of United Plastic Molders in Jackson, willing to build her prototype and then potentially start producing and distributing the baskets.

Smith said while the prototype is in progress, she will be open for orders and ready to go in October, just in time for Christmas. She is currently working on a website for her company named LaGwenBre Designer Corporation, and has a building she will begin working out of in Bogue Chitto. Smith has the goal of eventually building a plant in the area to manufacture/distribute from, creating jobs in her home community.

Smith said things just fell into place, as good things do in God’s plan, and she is thankful for all who have helped her make this a reality. Smith cites her church family at Emmanuel Temple Church, her grandchildren, neighbors on Hamilton Street, a special aunt and cousins as well as her attorney and manufacturer and her biggest supporter — her husband Lawrence.