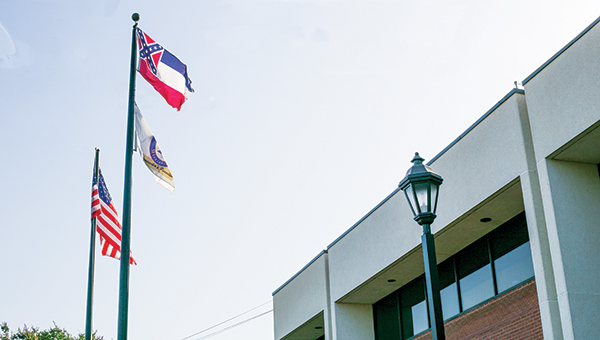 Photo by Kaitlin Mullins
The Mississippi, Brookhaven and American flags wave at the Brookhaven-Lincoln County Government Complex as calls to remove Confederate emblems echo through the South. Gov. Phil Bryant said he will not call a special session for the issue.

Through prayer, honest conversation and discussions about race, a local chapter of Mission Mississippi resolved that retiring the Confederate emblem on Mississippi’s flag is the clear Christian answer to a complicated question.

“It just really hit me very hard,” said Betty Harrington, a local leader of the faith-based organization dedicated to unity through Christ across racial and denominational lines. “I know such hatred exists and we’ve seen a lot of black-on-white and white-on-black violence in recent months, but this was of a different order. This just felt like pure evil.”

The tragedy in Charleston lay heavy on the spirits of the small group who met Tuesday night in the name of forging relationships across dividing lines. Candid conversations about race were conducted and it seemed clear that there was a mutual respect and understanding within the group of about a dozen church and community leaders, black and white.

“What happened in Charleston was undoubtedly racist,” said Pat Martin, Mission Mississippi member. “I mean anybody knows that, the guy said ‘I want to kill black people.’ But he did not represent most of us because I was devastated. The people I know were devastated just like y’all were.”

“I had a coworker come to me; she and I talk on a regular basis,” Gwen Smith said. “And she came to me apologetically telling me ‘Gwen, he does not represent all white people.’”

Gwen and her husband, Michael Smith, spoke from their perspective as a black couple.

“When you get out of that paralyzed mode, which was where I was for a while, you look for ‘what can I do constructive and helpful in response to this?’” Anne Matthews, priest at Episcopal Church of the Redeemer, said at the meeting. “Rather than let it take me down into a depression about the amount of racism that is still present in our culture.”

For some that has included a call for a removal of the confederate emblem from the Mississippi state flag.

“If you really think about it, the confederate flag was a flag of a treasonous people,” said Charles William, a member of Mount Wade Baptist Church in Brookhaven who was at the Mission Mississippi meeting. “They committed treason against the United States, so it should not be glorified in any way whatsoever.”

Arguments in favor of the current flag generally center around it being symbolic of Southern culture and heritage, citing historical significance. Critics of the emblem say it’s a racist symbol, and represents a war to uphold slavery and later to oppose civil rights advancements. Through whatever perspective the flag is seen,  Mississippi seceded expressly for slavery. The second sentence in the state’s secession declaration reads:

“Our position is thoroughly identified with the institution of slavery – the greatest material interest of the world. Its labor supplies the product which constitutes by far the largest and most important portions of commerce of the earth. These products are peculiar to the climate verging on the tropical regions, and by an imperious law of nature, none but the black race can bear exposure to the tropical sun.”

Many Mississippians look at the Confederate symbol and see the Ku Klux Klan, White Citizen’s Council or The State’s Rights Democratic Party, or “Dixiecrats,” who adopted it in the late 1940s. They remember it flown in opposition to the Civil Rights movement of the ‘60s and school integration continuing through the ‘70s.

“It was put on [the Mississippi flag] in defiance of the federal government telling the states that they have to integrate,” Kathleen Smith said.

For many members of the group, the flag is out of step with the progress the state has made since the Civil Rights movement.

“We were raised in a culture that we got along, and we see past color now – it’s just some people out there who can’t get over the past,” Michael Smith said.

A past currently present on the state flag, which most politicians who have spoken decisively on the issue say is misrepresentative of today’s Mississippi population. The tragedy in Charleston has spurred a national debate on the appropriateness of the Confederate emblem in official government use across the South.

Mississippi’s House Speaker Philip Gunn was the first top-tier Republican to speak on the issue, stating “We must always remember our past, but that does not mean we must let it define us.” Gunn cited his Christian faith as the basis for his belief that the symbol should be removed, as did Sen. Roger Wicker, R-Miss.

“I was delighted to read that Phillip Gunn has come out to take that off of our flag, I was thrilled,” said another MM member, Kathleen Smith. “I voted for a change in the flag when I had a chance to do so, but of course that didn’t work out.”

Confederate flags and emblems are being removed in concession and souvenir shops in National Parks by order of its director. In Hattiesburg, Mayor Johnny DuPree has removed state flags from city-owned buildings for an indefinite period of time.

The opposing stance of Mississippi’s Republican governor and lieutenant governor reflect a split that for the most part breaks with party lines – Democrats supporting the change and Republicans saying voters already decided on the issue 14 years ago. Mississippi residents voted, albeit apathetically, to keep the flag as is with a 65 percent majority.

Gov. Phil Bryant said Thursday that he would not hold a special legislative session for something other than a natural disaster or a major economic development project. Some had hoped he would call a special session to address the flag issue.

Some officials were less dismissive. Secretary of State Delbert Hosemann said “Our state will be 200 years old in 2017. If the flag does not represent our citizens today, then we, as a body, should select one that does.”

That will have to wait until legislators’ next regular session begins in January, after party primaries in August and the general election in November. At that time the governor, seven other statewide officials and all 174 legislative seats will de decided.

The position of sheriff is a multi-faceted one, and sheriffs are tasked with keeping the peace within the county amongst... read more