Two Brookhaven Academy juniors have been preparing a microbiology experiment for months so it can be tested by astronauts in zero gravity aboard the International Space Station in July.

Missy Clanton and Bailey Stewart have been studying enzyme production in yeast because it resembles human cells, in an attempt to understand how cancer cells grow in humans.

Through a partnership with the Students Spaceflight Experiments Program and NanoRacks. Clanton and Stewart will attend a two-day event, July 2-3, in Washington, D.C hosted by the Smithsonian Institute. The duo will orally present their experiment to more than 100 people, including actual astronauts and representatives from SSEP and NanoRacks and their poster detailing the experiment will hang in the 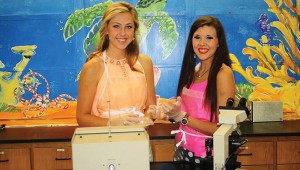 Photo submitted
Missy Clanton, left, and Bailey Stewart prepare their minilab to be shipped to Washington D.C. in preparation for their experiment to be sent to space.

Smithsonian during the event.

SSEP supplied Clanton and Stewart with a minilab — a silicone tube that can be separated into chambers — to use at BA. The duo would like to have tested their experiment on human cells, but they would be difficult to attain.

“I was proud of them for sticking with their original plan after they realized they could not get any human cells,” said Robotics Club faculty advisor and BA science teacher Leslie Hood. “They learned that you are going to ‘hit a wall’ when attempting any experiments and especially when they are being limited by the parameters of our school equipment.”

This is the second straight year that BA has sent a group to SSEP. In 2014, Ashlea Bardwell, Samantha Barton, Garrett Smith, Ruth Vaughan and Lindsay Winborne attended the event.

“NanoRacks has the pleasure of working hand in hand with students who are the future of the space industry,” said NanoRacks Marketing and Communications Manager Abby Dickes. “Brookhaven Academy students Missy Clanton and Bailey Stewart are two exceptional examples.”

Dickes continued, “Our unique role is being able to offer students complete technical assistance, walk them through the loading of their MixStix, and teach them about the safety requirements it takes to create an experiment qualified for reaching the ISS.”