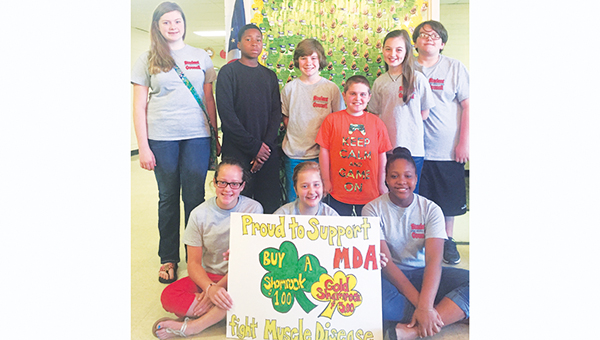 Photo submitted
The Lipsey School student council stands behind Nathan Williamson (in orange) with their support of the Muscular Dystrophy Association through the shamrock campaign. The student council raised approximately $500 to send kids like Williamson with MD to a summer camp at no cost to camper’s families.

When student council members at Lipsey School heard that the charitable organization they would support could benefit a classmate, they were all the more excited.

Lipsey students recently raised right at $500 as part of the Muscular Dystrophy Association Shamrock campaign that sends children with neuromuscular disorders to a summer camp tailored to them, at no cost to camper’s families.

Heather Smith, an adviser for the Lipsey student council, said they were made aware of the shamrock fundraiser, and it definitely piqued their interest. Nathan Williamson is a rising sixth-grade student at Lipsey, who was diagnosed with Duchenne Muscular Dystrophy.

“I’m not sure they realized that it would benefit children like Nathan; I don’t know that they made that association at first,” said Celeste Williamson, Nathan’s mom. “With advisers guiding, they sold clovers and raised an exceptional amount of money for middle schoolers.”

“They just kind of owned it and jumped right in — we didn’t really have to do anything,” Smith said. “We made a calendar where they took turns in the hallways each morning. They’d come in eager and excited to do that without any reminders from us or anything.”

Muscular dystrophy is a group of diseases that cause progressive weakness and loss of muscle mass, according to MDA.org. In muscular dystrophy, abnormal genes interfere with the production of healthy muscle. There is no cure for muscular dystrophy, but medications and therapy can help manage symptoms and slow the course of the disease. Williamson said in Nathan’s case, he is a hopeful student who is not struggling despite his disorder.

The week-long summer camp is an opportunity for kids with MD disorders to have fun and be amongst peers where physical disabilities are the norm rather than the exception.

“Basically they have about five days of fun,” Williamson said. “It’s the best week out of the year most of the time.”

“Each camper has a one-on-one counselor, so whatever activity they want to do the counselor is by their side and basically their best buddy for the week,” Williamson said. “They have all kinds of activities that most of them are usually not able to do.”

“We’re grateful for those [who contribute], the stores that sell clovers […] we definitely benefited, Nathan enjoyed his third camp experience,” Williamson said. “He can’t wait to go back, he always comes home not really wanting to come home — that basically he always wants to stay one more day.”

Smith said this fundraising effort was the first of its kind in recent years at Lipsey, and the students are already excited and prepared to do the same next year.

One church in Brookhaven is taking education of the community’s children into its own hands. The Junior Women and Youth... read more