Supporters of e-cigarettes packed the board room Tuesday night to complain about a proposed amendment to Brookhaven’s smoke-free ordinance.

Bill Wikstrom, owner of Vaporized, an e-cigarette and “vaping” store in Brookhaven, came to address the Board of Aldermen on the proposed amendment that was discussed at the June 17 Board of Aldermen meeting and reported in The Daily Leader June 18.

“I’m here in search of a solution in regards to a proposed ban on vapers here in the city of Brookhaven,” Wikstrom said. “After reading the article in The Daily Leader I was very surprised to read there was little information on the ban and I suspect that it was passed based on the common misperception that it is smoke instead of vapor.” 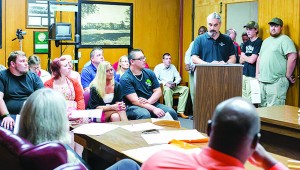 Photo by Kaitlin Mullins
Bill Wikstrom, owner of Vaporized e-cigarette/vaping store in Brookhaven, addresses the Board of Aldermen Tuesday night on the proposed amendment to the city’s smoke-free ordinance to include e-cigarettes.

The June 18 article stated that the city was considering an amendment to the current smoke-free ordinance to include e-cigarettes. Wikstrom said that he was under the impression the proposed amendment would prevent his or similar stores from regular operation. The board assured Wikstrom the amendment had not been passed, nor was the intention of the amendment specifically expressed.

“All we did was bring up to include an amendment to our smoke-free ordinance that would cover e-cigarettes,” Alderman-at-Large Karen Sullivan said.

Wikstrom cited a host of scientific information in support of vaping.

Currently the smoke-free ordinance restricts cigarette smoking in restaurants and businesses. Sullivan posed the question if the amendment was passed to cover e-cigs as well with the same restrictions, would they abide by it.

“At least leave it up to the business owners to decide because […] if people come in to buy my product, and they can’t even vape in my own shop you’re going to put me out of business,” Wikstrom said.

City Attorney Joe Fernald said the proposed amendment would not outlaw e-cigs or the vape stores. He said at the most, the amendment would make e-cigs subject to the same restrictions put on smoking — the sole restriction being no public place or place the public is served.

Thomas J. Payne, professor in the Department of Otolaryngology and Communicative Sciences, Cancer Epidemiology Program at University of Mississippi Medical Center, spoke on the dangers of e-cigs and urged the board to include them as part of the city’s smoke-free ordinance.

The board has yet to vote on the amendment.

• Mike McKenzie, of WGK Engineering, asked the board to approve awarding the bid for the Safe Routes to Schools Program to Pavecon, Ltd. The board approved the request and the project will move forward.

• The board approved to hire Robert L. Joiner, Tion Tee Lebbage and Jonathan Earl Tyler in the street department. It also approved to hire Walter Z. Moak as a non-certified full-time police officer and Richard Kelly as part time until October in the cemetery department.

• The board approved for Nicholas Gamble and Frederick Kees to attend the Confined Space class at the State Fire Academy from July 20 to July 23. The city will pay registration at $68 each and expenses.

• The board approved for Ray White to attend the Fire Plan Review class presented by the National Fire Academy at Mississippi State University from July 20 to July 25. The class is free and the city is to pay expenses.

• The board approved the payment to F. L. Crane and Sons, Inc. for the acoustic spray of the FEMA building in the amount of $34,350. The quote was approved on April 21.

• The board approved for Chris Davis to attend the EMT Basic Class at Southwest Community College from Aug. 4 to Dec. 10. The city will pay registration at $550 and expenses.

Photo by Kaitlin MullinsBridget Hall, 43, was shot in her home (pictured above) on Vivian Merrit Street Monday night. Her... read more