Police explore all angles in investigation of murders 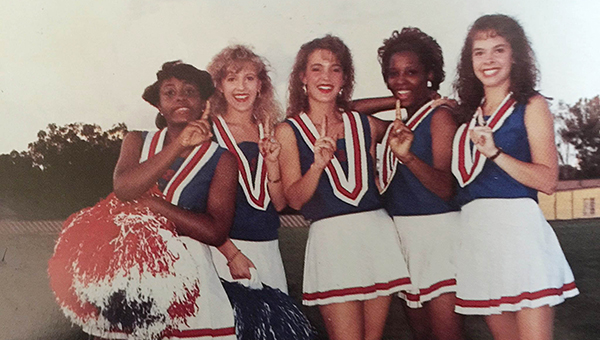 Photos courtesy of Facebook
Following the death of Bridget London Hall on Monday night, friends began circulating photos from her high school yearbook. Hall was named Brookhaven High School Homecoming Queen in 1989 and most popular. She also was a cheerleader her senior year.

The Brookhaven Police Department continues to investigate two fatal shootings that occurred in the city earlier this week, and Chief Bobby Bell said the department is exploring all possible angles.

Claudis D. Montgomery, 40, of 4208 Highway 550, was charged with murder around 4 a.m. Tuesday morning in Humphrey’s death. Montgomery’s brother, Claude, was Hall’s boyfriend. That association has raised speculation that the two murders are connected.

“I’ve got to look at all possible angles,” Bell said Wednesday.

When Hall died in her home Monday night, she left behind four children.

The London family has created a GoFundMe campaign to help raise funds to help support her children. Those wishing to donate money can go to gofundme.com/yvb3keg.

Hall’s brother, Ricky London, said she was a 1990 graduate of Brookhaven High School, and she is survived by four children, eight brothers, two sisters and her father.

The family wrote on the GoFundMe site that Bridget was a hard-working single mother who had a voice like no other.

“She brought joy and lit up the room wherever she went,” the site reads. “Words cannot begin to express the sadness felt knowing that she will no longer be with us here each day.”

Both victims’ funerals will be held Saturday. Humphrey’s will be at St. James M.B. Church at 11 a.m., and Hall’s will be at Alexander Junior High School at 2 p.m.

In the wake of back-to-back murders, city officials and residents agree that the Brookhaven community needs to come together and... read more