“He’s basically a 6-foot man with a 4- to 5-year-old mind,” Melinda Wages said of her son, explaining his autism. “People ask me how I do it, and I think, he’s one of the luckiest people — he has a God-given gift that he sees no evil in the world.”

His parents, Melinda and Tony Wages, said they knew they had to figure out something that Matt could do since continuing his education wasn’t a possibility. Melinda said they tossed around ideas for home businesses, so that Matt could have something to get up and do to keep him productive and to build self-esteem while under his parents’ care. The recurring idea for a bait shop seemed the most fitting. 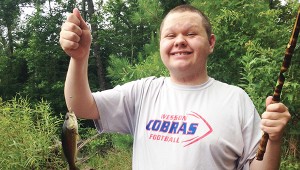 Photo submitted
Matt Wages, 19, shows off his catch. Wages graduated in May from Wesson Attendance Center despite his limited-functioning autism.

Wanting him to have a way to be around people, Melinda said they dove in head-first to build Matt’s Bait and Tackle, on 1037 Rocky Hill Road in Wesson. The couple bought a portable building and proceeded to do everything for the business themselves, including plumbing, insulation, electrical work and more. Melinda said it has been hard work and a financial strain since January when they started.

Matt works with his dad to run the bait shop. He cannot work the register, but he loves to fish and is thrilled to have what he sees as his own store. He likes checking on the minnows, looking at the crickets and lining up the containers of worms in the fridge.

Melinda said the key with Matt, like most with autism, is consistency. She said Matt’s sisters Tiffany, 22, and Brandi, 18, have been amazing, never treating him any differently — an attitude reflected in their friends and the community in general.

Melinda said everyone in Wesson knows her son. This is partly because, surprisingly, Matt is a hugger. One common characteristic of autistic children, adolescents and adults is their usual aversion to physical contact like hugging, but Melinda said Matt walks up to people to hug them and tell them he loves them.

“I’m just thankful that our little town has just [embraced him], Matt’s like everybody’s son and everybody’s brother,” Melinda said. “The community just looks out for him. Even at school. He was bullied at school once and the kids handled it. I didn’t have to step in before other kids took care of it. And it wasn’t even my children it was other people’s children saying ‘Hey that’s not OK.’

For these parents, the hope is that Matt will run the bait and tackle shop on his own one day. But for now the family is working diligently toward their goal of a successful bait shop, keeping a positive attitude along the way.

The National Weather Service in Jackson has extended the heat advisory for Lincoln County until 7 p.m. Wednesday. Temperatures will... read more