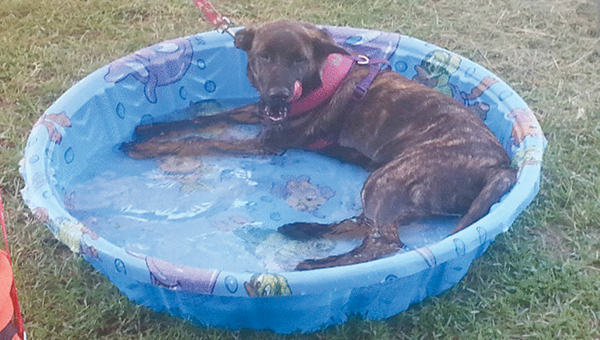 Photo submitted
Shade and water is the key to keeping your pets safe this summer.

We know exactly how hot and uncomfortable we feel during a scorching Mississippi day, but do we understand our pet’s pain — and potential danger? When you’re sweaty and suffering, it’s even hotter for pets and there are important steps to take to keep them safe.

Not just the temperature, but humidty too

Pets respond differently to heat than humans, the Humane Society of the United States warns. For instance, a fan is not as effective for cooling off pets as they are for people.

“It’s important to remember that it’s not just the ambient temperature but also the humidity that can affect your pet,” says Dr. Barry Kellogg, VMD, of the Humane Society Veterinary Medical Association. “Animals pant to evaporate moisture from their lungs, which takes heat away from their body. If the humidity is too high, they are unable to cool themselves, and their temperature will skyrocket to dangerous levels — very quickly.”

This makes keeping pets outside in South Mississippi risky and almost assuredly dangerous for pets that are not attended to.

Plenty of shade and water

Veterinary technician at Animal Medical Center of Brookhaven Michelle Groover said when it gets hot, depending on the breed, dogs are going to overheat if left outside without enough shade or water.

“If they have a lot of hair, [or someone is] leaving them out without paying attention to keeping enough water or if there is not enough shade they’re going to overheat,” Groover said. “Older dogs or dogs with heart problems, double-coated breeds, they don’t have a good way of cooling off and should be inside.”

Groover also said dogs do not cool down as easily as we do, and she puts a swimming pool outside for her pups to make sure they stay cool. Shade sources that do not obstruct air flow such as tarps or trees are best. Dog houses do not offer relief from heat — in fact, they can make it worse.

Never leave your pet inside a car. Pet professionals say having the windows down does little to nothing to cool the inside temperature. When cars are left running with the AC on for pets, theft becomes a more real danger.

Groover said more often than people leaving pets inside their vehicles these days are people having their dogs ride in the back of their trucks. For a truck with a bed liner this is usually fine, but the metal surfaces of unlined beds can definitely burn a pet’s paws, Groover said.

Along the same lines, when walking during hot days, try to stick to grass and avoid concrete and asphalt which can burn sensitive paws. Take walks during the cooler hours, and be sure to not over-exercise pets as they dehydrate quickly.

Watch out for signs of overheating, especially in high-risk animals, advises the ASPCA.

Symptoms of overheating in pets include excessive panting or difficulty breathing, increased heart and respiratory rate, drooling, mild weakness, stupor or even collapse, the ASPCA says in a summer advisory. They can also include seizures, bloody diarrhea and vomit along with an elevated body temperature of over 104 degrees. Animals with flat faces, like Pugs and Persian cats, are more susceptible to heat stroke since they cannot pant as effectively. These pets, along with the elderly, the overweight and those with heart or lung diseases, should be kept cool in air-conditioned rooms as much as possible.

Groover said if a dog is panting a lot, weak or their temperature gets high to bring them indoors and put them in a cool bath tub. Groover said applying rubbing alcohol on their paws and belly helps to cool animals off quickly, but for any major distress to call for a vet immediately.

The Brookhaven School District board of trustees on Tuesday approved the district’s ad valorem request that will maintain the current... read more