Robertsons: It’s not about us; it’s about God 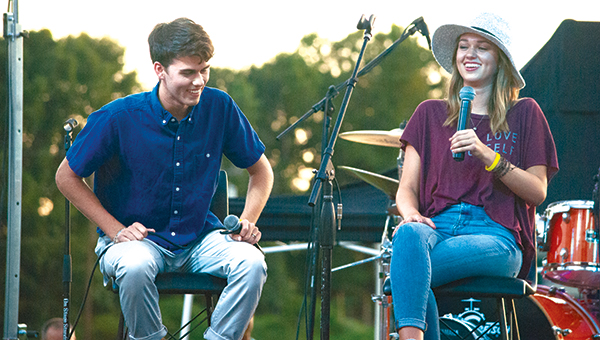 Photo by Julia V. Pendley
John Luke and Sadie Robertson spent much of the time joking around. The majority of their conversation showed how important God is to each aspect of their lives.

Hundreds of people gathered at the Brookhaven Academy football field Saturday night to see reality TV stars John Luke and Sadie Robertson take the stage. Through a lot of laughs and quirky anecdotes, the children of the Duck Commander moguls talked about what it’s like to stay true to themselves even in such a bright spotlight.

“We were who we are before the show,” Sadie said.

Even when the producers pushed the Robertsons to be more drama filled, they stuck to their guns. Sadie said when they were filming the first episode, the family got together and played football. Afterward the producers called them together and said they needed to refilm.

“The kids were a little too polite to to their grandpa,” Sadie recalls being told.

The children were instructed to telling their grandpa “no” instead of being obedient. The producers soon learned that a push for extra drama would not be successful.

“People will respond to us being real,” Sadie recalled saying. “We were right, and we’re just so thankful for that.”

Instead of following in the footsteps of other reality stars, Sadie and John Luke said they have decided to use their platform to promote good in the world.

Both have their own ministries to help bridge the gap between adolescence and adulthood.

John Luke’s “Young and Beardless” campaign represents a search for wisdom. The idea came from being surrounded by men with beards. For him, the beards began to represent wisdom.

“[Young and Beardless] is helping people who are young to grow up and find wisdom in your life,” he said.

Sadie’s ministry is about being confident in one’s own skin. Her book “Live Original” was produced after frustrations during interviews.

“I wouldn’t ever say what I wanted to say or what I meant to say,” she said.

Just as the Robertsons have put God first in their fame, they believe that’s the key in love as well. John Luke, who recently got married, said many ask him why he chose to get married so young. He said his own parents got married at 18 and 19, and his wife’s got married at 32 and 40.

“We’ve seen everything,” he said. “The marriages that last and that work are marriages that put their focus on something bigger. Our marriage is not about us; it’s about growing closer to God.”

Sadie said she and her boyfriend try to keep a similar perspective.

John Luke also added that it’s important to not go into a relationship thinking you can change the other person.

God is also the solution to dealing with mean girls, according to Sadie.

“It’s not about putting confidence in yourself; it’s about being confident in God,” she said.

Sadie said that when you stop worrying about what others think about you, you become happier with yourself.

Sadie and John Luke spoke during a a back-to-school prayer rally held at Brookhaven Academy. The event also featured Jasmine Murray who presented her “13 Going on 30” program, which promotes teens to act like their age rather than striving to be older.

Just a few months ago, K-9 officer Lucas jumped into action to save Deputy Todd Frazier on a dark Mississippi... read more