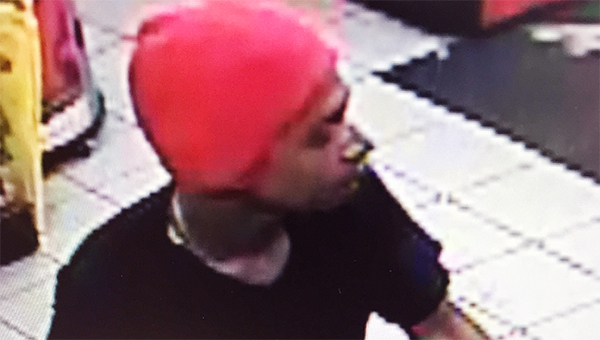 Photo courtesy of BPD
BPD searches for the suspected who was caught on surveillance tapes during the robbery Thursday night.

An armed robbery was reported Thursday night at a convenience store on Hwy. 51, police confirmed.

Police Chief Bobby Bell said the Brookhaven Police Department got a call Thursday at 10:31 p.m. of an armed robbery at the A-One Stop convenience store on Hwy. 51 North. The clerk said a black male came into the store, grabbed a drink and came to the counter where he asked the clerk for a pack of cigarettes. The man then asked her for money, the clerk said, and lifted his shirt up to reveal what appeared to be a gun. She gave him money and the suspect left the scene.

Bell said police were able to pull images of the suspect from  security footage.

A photo taken from the store’s security footage has been shared with The Daily Leader and as the investigation continues, BPD urges anyone with any information to call Crime Stoppers at (601) 355-8477 or the station at 833-2424.

More information will be published online as it is made available.

Month-long burn ban in effect: Without rain, ban will be extended

Lincoln County is currently under a burn ban, according to the Mississippi Forestry Commission. Steve Williams, with MFC, said the... read more