Man dies in morning fire: Victim was confined to bed with medical condition 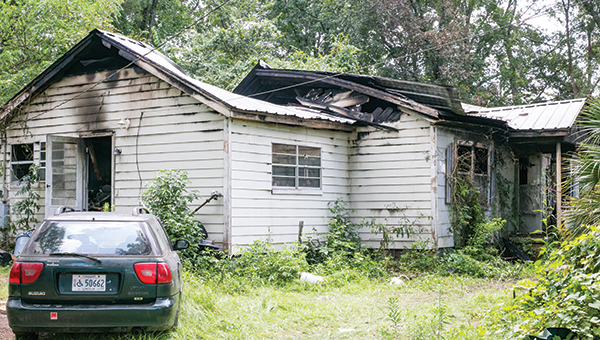 Photo by Kaitlin Mullins
This home at 1804 North Jackson St. was destroyed in a fire Sunday morning. William David Love was killed in the blaze.

BFD Chief Tony Weeks said the fire was fully involved when all three BFD units arrived. The cause of the fire is unknown, Weeks said, and is under investigation by the state fire marshal.

Weeks said the fire started in the bedroom, where Love was confined to the bed with a medical condition. The home’s other occupants, Love’s wife Katie and their grandson, were present at the time of the fire and were both able to escape.

“It was a stubborn fire, took us probably a couple hours,” Weeks said. “It went from bedroom — we knocked that down — but it went from the bedroom and got into the attic.

The building is still standing, but [it resulted in] 100 percent damage to the building and contents.”

“We hate to see something like [this],” Weeks continued. “It’s bad enough to have a house fire, even when everyone gets out they lose all their belongings — but to lose a family member, we hate to see that kind of stuff. It happens […] but it doesn’t make it any easier.”

Tax woes due to human error: County manager says computer not to blame

A miscalculation in the Lincoln County Tax Assessor/Collector’s Office that will cost the county tax revenues was not a computer... read more