When I first saw the photo on Facebook, I was more than a little shocked.

Do we really have 5-foot rattlesnakes in Lincoln County?

Andrew Waldrop posted a message to the newspaper’s Facebook page about a snake he killed this week. According to Waldrop, the snake was 5 feet, 3 inches with eight rattles. In one photo, the snake is easily as big around as the adult arm next to it. 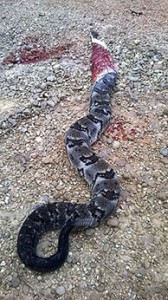 That’s an impressive snake, and the largest I’ve seen in this part of the state. I’m guessing a snake that size could eat a cat — maybe even a very small dog.

I’m no stranger to snakes. I grew up catching just about any non-venomous snake I could find. Most were small, but there were a few over 5 feet.

Fortunately, I’ve never had any bad experiences with snakes. My father, however, can’t say the same. A few years ago, he was bitten by a large rattlesnake under our house in Decatur. The snake’s rattling sounded like a busted pipe spewing water, so he crawled under the 100-year-old home to investigate.

He found a timber rattlesnake instead. It only got a single fang in his leg, but it was enough to send my dad to the emergency room. He spent six weeks on crutches after being released from the hospital.

My dad’s snake story hasn’t dissuaded my son from trying to grab the snakes he finds around the house here. Thankfully, he knows how to spot a venomous snake and knows to stay away. But the many garter snakes in our yard and nearby woods are fair game, and he’s nabbed quite a few of them.

They will bite, but it doesn’t hurt much — or so he says.

Despite knowing better, most of us are naturally curious enough about snakes to get too close to them. And it’s not just children. Adults will do the same thing. There’s something almost other-worldly about a snake slithering through the grass. Most of us are also quick to grab a shovel or hoe and leave it headless.

Maybe it’s our Biblically inspired distrust of snakes that causes us to hate them. My wife would prefer that I kill anything that even remotely resembles a snake. Lizards, frogs, toads —if it’s in the reptile family, she wants it dead.

I, on the other hand, prefer to leave most of God’s creatures alone. The one exception is a venomous snake. While I hope to never run across a rattlesnake as large as the one Waldrop found, if I do I’ll leave it in the same condition he did.

I was in the Delta recently, a land some refer to as the South’s South, which is why I was... read more