The Copiah-Lincoln Community College Alumni Association honored five outstanding faculty and staff members during the annual fall convocation on the Wesson Campus Aug. 10 and will also recognize the group during the alumni luncheon at Homecoming on Oct. 3.

Those honored were Amy Case of Brookhaven, Blake Oberschmidt of Wesson and Velesta Young of Wesson, all from the Wesson Campus; Amanda Hood of Utica, Natchez Campus; and Bryon Conville of Mendenhall, Simpson County Center. 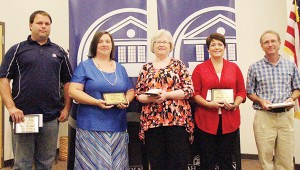 Photo submitted
Amy Case of Brookhaven, Blake Oberschmidt of Wesson and Velesta Young of Wesson, all from the Wesson Campus; Amanda Hood of Utica, Natchez Campus; and Bryon Conville of Mendenhall, Simpson County Center, were recently named as outstanding faculty.

Case was selected as outstanding academic instructor of the year. She has been employed at Co-Lin since 2002 and began her career at Co-Lin working part-time in the humanities lab before returning to school to receive a bachelor’s degree from The University of Southern Mississippi and a master’s degree from American InterContinental University. Today she serves as a Beginning and Intermediate English instructor.

She is active in the Mississippi Association of Developmental Education organization and is a member of Brookway Church of Christ where she teaches Bible class. She is married to Jason Case and they have a daughter, Jaycee.

Oberschmidt was selected as outstanding career/technical instructor of the year. He has been employed at Co-Lin since 2010 and serves as program coordinator of Automotive Technology

He is a graduate of Co-Lin’s automotive program. Prior to Co-Lin, he worked at Stan King Chevrolet for over 14 years. He is an ASE Master Certified Auto Technician and attends Strong Hope Baptist Church. He is married to Sandy Oberschmidt and they have two children, Kayla and Preston.

Young was selected as outstanding staff member of the year. She has been employed at Co-Lin since 1996. She is a graduate of West Lincoln Attendance Center and serves as accounts payable manager in the Business Office.

She is a member of Mt. Zion Baptist Church where she serves on the building and grounds committee. She is married to Gwyn Young and they have two children, Lane Young and Jessica Hynum, and five grandchildren.

Hood was selected as outstanding faculty/staff member for the Natchez campus. She has been employed at Co-Lin since 2011 and serves as a mathematics instructor and Phi Theta Kappa advisor. She received an associate’s degree from Co-Lin, and bachelor’s and master’s degrees from Mississippi College, and is currently pursuing a Ph.D. at Mississippi State University.

Prior to Co-Lin, she was a math teacher and tennis coach at Hillcrest Christian School and amathematics instructor at Hinds Community College. She is a member of Mathematical Association of America and Pine Bluff Baptist church, and serves as director of the Mississippi Regional Science Olympiad. She is a recipient of the Howell Garner High Performance Award and the SOAR Golden Apple Award. She is an avid runner, having completed several half marathons and marathons and was Mississippi Track Club’s Grand Prix Champion in 2012.  She is married to Charles Hood and has a stepdaughter, Lauren and a grandson, Bryson.

Conville was selected as outstanding faculty/staff member for the Simpson County Center. He has been employed at Co-Lin since 2005 and serves as librarian and teaches English Composition and British Literature courses. He received a bachelor’s degree from Auburn University and a master’s degree from the University of Alabama.

Prior to Co-Lin, he was a librarian in Charlotte, North Carolina and at the Canton Public Library. He personally built the entire collection at the Taylor Library at the Simpson Center.

He is a recipient of the Howell Garner High Performance Award and serves as a Boy Scout Leader.

He is married to Alison Conville and they have two children, Daniel and Michael.

Advanced Healthcare will move forward with its original plans for a 44-bed assisted living center in the Meadowbrook neighborhood, and... read more