Electronic cigarettes are now subject to the same restrictions as traditional cigarettes under Brookhaven’s smoke-free ordinance, which now includes an exception reserved for “vape” stores.

The Brookhaven Board of Aldermen voted Aug. 4 to approve an amendment to add e-cigs to the city’s ordinance that regulates smoking in public areas. To satisfy concerns from local retailers specializing in e-cig and vape technology, the board included language to allow for e-cig smoking/vaping in these stores. The smoke-free ordinance dictates it unlawful to smoke in indoor places including all government buildings and vehicles, all restaurants in the city limits and within the confines and premises of any business that elects to prohibit smoking. Not subject to the restrictions are establishments predominantly in the business of the sale of tobacco products or e-cig devices. 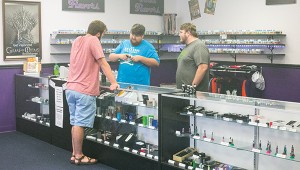 Photo by Kaitlin Mullins
Brookhaven’s smoke-free ordinance now covers e-cigs. The e-cig retailers in town are excluded from the restrictions.

“Our main concern was that they would ban it in public businesses and overlook the vape shops, as many counties have done before,” said Steve Johnson, store manager at Vaporized. “I am very happy that they didn’t decide to ban it in the vape shops, that they thought of us.”

In the Board of Aldermen’s meeting July 7, Vaporized Owner Bill Wilkstrom presented concerns about the city banning these devices, following an address by Dr. Thomas J. Payne about adding e-cigs to the smoke-free ordinance. Anti-tobacco supporters pushed for the inclusion while local vape retailers urged the city to consider their businesses.

“We try and educate our customers that there should be an etiquette to vaping in public spaces, because we don’t want it to get a bad rap like cigarettes, if it is truly helping people,” Johnson said. “People don’t realize it doesn’t carry nearly the nicotine through vapor for secondhand as traditional cig smoke does. […] We don’t want to give people the wrong impression or just give them a bad taste in their mouth about the whole subject just because they see somebody fogging up a place.”

“We try and educate them on etiquette but I am sure the city passed it for that reason,” Johnson said. “Nobody wants to go out to dinner and a place be fogged out.”

2 open seats on LCSD board: Positions should have been filled in ‘14 election

The Lincoln County School District school board will have two positions on the ballot in November after some discrepancies called... read more