BFD responds to two fires in one day; no injuries reported 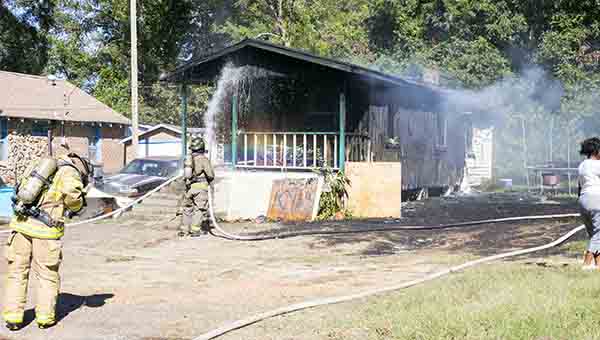 Kaitlin Mullins / No one was injured in Wednesday afternoon’s house fire at 408 J W Morgan Drive.

No one was injured in a house fire at 408 J W Morgan Drive that began around 4 p.m. Wednesday.

Brookhaven Fire Chief Tony Weeks said people in the house got out as soon as they saw fire avoiding any injuries. The cause or other circumstances surrounding the fire are not yet known. The structure is still standing, but the extent of the damage is unknown at this point. Details will be released as they are made available.

This was the second house fire in Brookhaven today, with the first about 12 hours earlier at 4 a.m. at 235 Roger’s Circle. It was a vacant rental house and no one was hurt, Weeks said. Weeks said the State Fire Marshal was already coming to Brookhaven Thursday to investigate the cause of the 4 a.m. fire, so he could look into the most recent house fire as well.

The station also responded to a grassfire earlier in the day Wednesday.

Update: The parents of a 7-year-old autistic child who went missing from Mamie Martin Elementary School Wednesday said he was... read more