You asked: Cemetery name is one word, not two 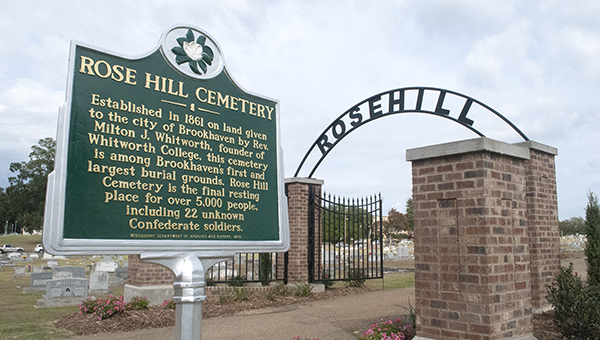 File photo
Though seen here with contradicting spellings, Rosehill Cemetery was intended to be one word by the woman who named it, known about town as “Grandma Boswell.”

: Is the correct name of the cemetery on East Monticello Street Rosehill or Rose Hill? One word or two?

: One, say members of the Rosehill Cemetery Restoration Foundation.

Not to be confused with the cemetery beside Rose Hill M.B. Church, Rose Hill M.B. Church Cemetery, the cemetery on East Monticello Street by Brookhaven High is (one word) Rosehill Cemetery. Secretary for the Rosehill Cemetery Restoration Foundation, Tammie Brewer, said the historical marker that reads “Rose Hill” as two words is actually incorrect.

Michael Crawford is also a member of the RCRF and said though he isn’t a descendent, he learned the name of the cemetery and the woman who named it from his family. In sharing his knowledge, a familial, though false, connection could have been made because of the woman’s alias.

“Her name was Amanda Sims Boswell,” Crawford said. “She was known here in town, all over town, as ‘Grandma Boswell’ and she named the cemetery. She was still living in my grandmother’s time and she remembered her. That’s how my dad knew, he learned that from his mother, and passed it along to us.”

How did Grandma Boswell get the gig to name the prominent cemetery? Crawford said perhaps because Boswell was a much-venerated citizen — probably the oldest citizen in town at the time.

When the historical society sent for the marker there was an oversight with the editing that resulted in a two-word spelling, incongruous with the sign over the entrance that reads ROSEHILL, one word.

Murder suspect in court Sept. 15: Suspect in another July murder bound over to grand jury

The Brookhaven man charged with the late July murder of Glen Mack will have his preliminary hearing in city court... read more