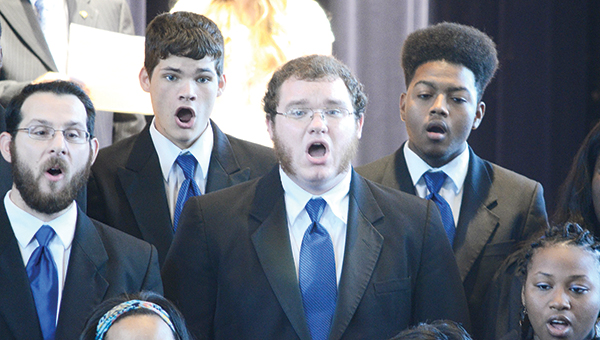 Photos by Luke Horton
Members of the Co-Lin choir sing the school’s Alma Mater during a 100-year celebration event at Rea Auditorium Thursday.

The most surprising thing when looking back at Copiah-Lincoln Community’s College’s 100-year history isn’t how much things have changed, but how much some things haven’t.

The school opened in 1915 as an agricultural high school, after Wesson leaders met under a magnolia tree and decided to start a school. The town put up $8,000 to fund the school.

Those leaders had a commitment to provide educational opportunities in what was once a very rural area. The past presidents, graduates, students, faculty members, staff members and guests who gathered at the campus Thursday to celebrate the school’s 100th year share that same commitment. 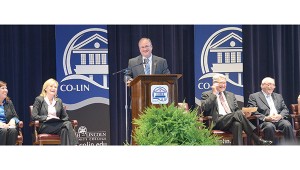 Another thing that hasn’t changed: The school opened Thursday’s celebrations with a chapel service, much like the school would have long ago, current Co-Lin President Ronnie Nettles said.

Another similarity: There were dirt roads on campus when the school opened in 1915, and a stretch of roadway in front of the administration building has returned to its dirt roots today as construction on a new pedestrian corridor continues.

“I took a highway and turned it back into a dirt road,” Nettles joked. “Maybe by the time we do this again you’ll see what’s going to be a beautiful pedestrian corridor through the middle of our campus with planters and seats for our students and a wonderful walking area for all of our community to enjoy.”

The college traces its roots to an agricultural high school that once had a working farm. There were 125 students enrolled that first year the school opened. Tuition was about $5 per month.

Since that time, the school has experienced tremendous growth. College classes were added in 1928, and the college’s budget is now more than $24 million.

“We got a good education here,” Thames said about his time as a student in the 50s. “I told my children, they had two choices when going to college. They could go to Co-Lin and like it or they could come to Co-Lin and not like it. And they loved it. They enjoyed it. I’m proud of the education they got.”

Commissioner of Agriculture & Commerce Cindy Hyde-Smith also spoke at Thursday’s event at Rea Auditorium. Hyde-Smith is a graduate of Co-Lin.

The father of a man charged with murder was arrested Wednesday for intimidating a witness. Fred Hill Jr., 108 West... read more