Many workers observe Labor Day, many others punch the clock 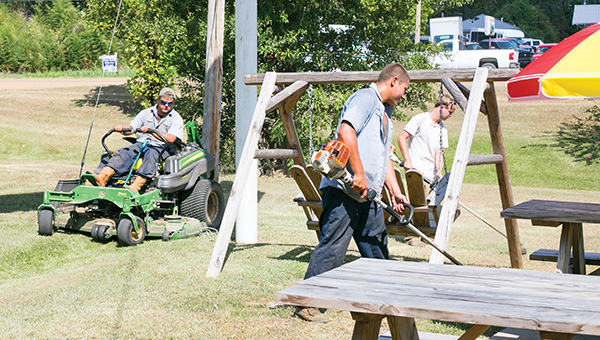 Employees of U.S. Lawns in Brookhaven will enjoy Labor Day off this year, while Labor Day 2014 came and went with work as usual. From left, Sean White, Levi Forsyth and Nick King (in white) do some landscape maintenance at a snowball stand on Highway 51.

A creation of the labor movement, the character and celebration of Labor Day has changed a great deal since its beginning. The holiday is America’s salute to the economic achievements of the country’s work force, though the opportunities to observe Monday vary across collar colors.

From the days of parades and the growth of labor unions, to political speeches and the more family-centered celebration, Labor Day exists as a day for most of the country to relax. Millions of others continue to clock in to keep the country safe and running.

The first Labor Day was held in 1882 in New York City in accordance with plans of the Central Labor Union. The CLU held its second Labor Day holiday a year later, and in 1884 the first Monday in September was selected as the holiday. According to the Department of Labor, the idea spread with the growth of labor organizations, and in 1885 Labor Day was celebrated in many industrial centers of the country.

These days, Labor Day means many retail stores are having sales and restaurants are open, though many choose to hang around the house, barbecuing or enjoying the end of summer. For many office jobs, all government jobs and most corporate ones, Monday is expected and celebrated. Some manual laborers might have off, like some in Brookhaven, but a great many more “blue collar” positions don’t.

Some employees of Brookhaven lawn maintenance company U.S. Lawns said, for instance, last year Labor Day came and went like any other day, but this year they have off. Sean White at U.S. Lawns said he is happy for the opportunity to catch up on sleep, throw some food on the grill and visit with friends and family.

Some other local companies have found the same flexibility, at least this year.

“With construction when the weather is good, we need to be working,” said Jonathan Halley, owner of Halley Construction. “Next week it might be raining all week and we might not be able to work.”

Halley said for this Labor Day, to work or not work Monday is the employee’s preference.

“I have about 35 employees, and I’ve let them make the decision,” Halley said. “If they want to be off, I’m letting them take off but if they want to I tell them ‘I’ve got the work for you.’ I try to be the nicest boss I can be.”

Many working in manual labor positions will forgo their holiday to finish projects and continue contracted work, yet some companies have found difficulty operating at the desired level and choose to join in on Labor Day. Ronny Smith of Oddee Smith and Sons Construction, Inc. said in recent years it was decided that Labor Day isn’t usually a productive enough day to try to have everyone come in.

“A [part of the reason] is there are places we depended on for certain things, like suppliers [and others] and they were off so we started taking off,” Smith said. “A lot is because we couldn’t perform our work at 100 percent; if something were to break down we wouldn’t be able to get a part. Also, if we continued to work then they – inspectors, engineers or architects – would have to come on the job then they wouldn’t be real happy campers.”

Smith said other companies may not hold the same sentiment, but with all things considered skipping the holiday became more trouble than it’s worth.

“Over the last several years we just decided. This year it’s been real dry, we’ve had a good work season and so if a good opportunity comes to take a breath – we’ll take it,” Smith said. “And the employees, they want to be off. […] It’s an opportunity before Thanksgiving and Christmas to take a trip or just have an extra day.”

In some lines of work that are necessary to keep society running smoothly and safely, however, the luxury of a holiday off isn’t a decision management can make. Those working in law enforcement or the medical field may have off if they have seniority and have waited their turn, but many punch the clock as usual.

This is true for the Lincoln County Sheriff’s Department. Sheriff Steve Rushing said for law enforcement, Labor Day is just like any other work day.

“We’re out making sure everybody’s safe in their travels and as they enjoy their holiday weekend,” Rushing said. “We’ll be out in the community patrolling and answering calls; trying to help monitor traffic [because there] should be some on the roads this weekend.”

Other professions with work on Monday include utility workers like electrical power line repairmen, telecommunications companies, railroad and air traffic workers, firefighters, nurses, some water and wastewater companies and a great majority of those in the service industry. While many hard-working Americans will relax come Monday, many others will head to work — some settling for holiday pay.

Marvin Falvey realized his childhood dream of owning Texas Longhorns and keeps them on his property on Old Red Star... read more