They were known as the Black Cats, the 13th Armored Division in World War II. They were there in Germany during the last days of the war in Europe. They met once again in Washington, D.C. for a reunion on Sept. 9. Among them were locals Howard Britt and his wife Margaret-Anne.

“Doug Warren and his wife Brenda drove us to Washington. It was two days of driving, eight hours a day,” Howard said. “It was a 2,165 mile round trip.” 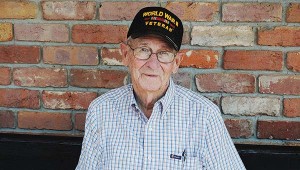 According to Margaret-Anne, there were only 11 veterans from the group left.

“There were 70 people in all. The veterans bring family and friends,” Margaret-Anne said.

During the reunion, veterans and their families went to a number of events. First, was a tour of the Pentagon.

“It was a city within itself,” Margaret-Anne said. “They said the glass was so thick the brick would break before the glass.”

The next day, the group went to a memorial at the Memorial Amphitheater at Arlington National Cemetery.

“That is the most unreal thing I have seen ever in my life,” Margaret-Anne said. “It was so big and so nice.”

The 13th Armored Division plans to have one last reunion in New Orleans next year. Howard still remembers his experiences in the war.

“People here don’t know how the war was,” Howard said. “I missed getting killed four times in Germany.”

The 13th Armored Division was attached to the Third Army led by General Patton near the end of the war. Their march across Europe, Howard said, was exhausting.

“When he [Patton] met us, he outlined to our top commanders which rout to take,” he said. “We went 60 days without a warm meal and a change of clothes. I went four months without a bed to sleep on.”

At one point, Howard says he and his division found themselves at the house Hitler was born in. His division was also involved in some of the last battles of the war.

After the war in Europe ended, the 13th Armored Division was expecting to be sent off to Japan.

“We were going to Japan to surround Tokyo. We planned to have 80 percent casualties. They gave us a 30-day leave and I had one week left when they dropped the atom bomb,” said Howard.

The invasion of Japan never happened, and Howard was able to spend some time in California before being shipped back to Camp Shelby in Hattiesburg.

Margaret-Anne will be holding a party celebrating Howard’s 90th birthday on Sept. 27. Margaret-Anne said everyone’s invited, and no gifts are necessary. However, if you know Howard personally, she’d like you to bring a note with a shared memory.