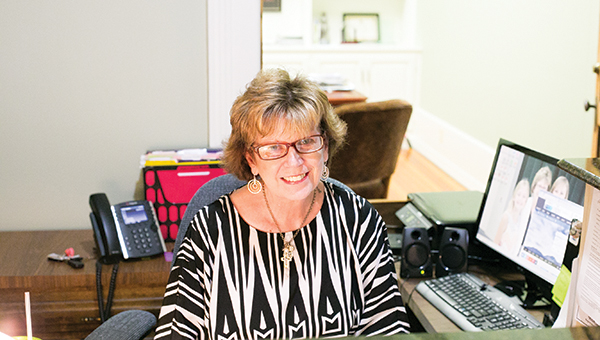 Photo by Kaitlin Mullins
Pam Cartwright is retiring from her position as office manager at the Brookhaven-Lincoln County Chamber of Commerce after 40 years of service.

“Pam is the glue the holds us all together,” said Garrick Combs, Brookhaven-Lincoln County Chamber Executive Director.

After 42 years as the face of the Chamber of Commerce, Office Manager Pam Cartwright will retire at the end of this year. Combs said he first met long-time chamber Cartwright in 2000 as a graduate student when he was completing an internship at the Chamber.

“She went out of her way to make me feel welcome and get me settled,” he said. “Thirteen years later when I had the opportunity to come back to Brookhaven as Chamber director, one of the biggest reasons the job was appealing to me was that I knew just how great the staff is and that Pam had the office under control and knew everything there was to know about the Chamber.”

Cartwright has been a driving force behind the Chamber and all it does for more than 40 years. She’s the one who makes sure everything gets done. Cartwright works hard behind the scenes, and prefers it that way.

“[She’s] one of those kind of people that does a great job and doesn’t want the recognition,” said Stan Patrick, current Chamber president who has worked with and known Cartwright for many years. “[She] doesn’t want to be in the limelight, but she is the-behind-the-scenes person who makes sure everything is done. She’s always there to take care of things.”

Peers say the diligent, dedicated, helpful and kind office manager knows the Chamber and the community inside and out. Bill Jacobs has been a member of the Chamber of Commerce since the early ‘80s, and has worked with Cartwright in several other capacities.

“Without her we would not be where we are,” Jacobs said.

Cartwright also serves as board secretary of the Lincoln County United Way and Patrick, Combs and Jacobs all referenced the great work she has done for the organization.

“She’s been a fixture at the Brookhaven-Lincoln County Chamber for forever and a day, Patrick said. “She has done an amazing job for a long time, and she’ll be greatly missed.”

Patrick said Cartwright has always been the person at the front desk who greets people as they walk in, and while the Chamber is saddened to see her go, they are excited for her and the new chapter she will pursue.

“She will be sorely missed professionally and personally, but we are excited for her as she transitions into this part of her life and career,” Combs said. “The chamber could not have had a better office manager.”

A school bus driver for the Lincoln County School District was arrested Friday on a charge of touching a child... read more