This competition, where participants run horses in criss-cross patterns around barrels, took place in the James Lynn Cartlidge Forrest County Center in Hattiesburg. According to her mother, Christy Barras, there were 166 entries from as far away as New York.

The event started on Friday and lasted all weekend. Participants had two runs — called gos — to qualify for the finals. 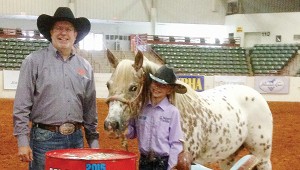 Charleigh placed first with a time of 18.864 seconds. Prizes for winning participants include a saddle and money, along with a wild card that allows winners to get an invitation to the NBHA world championships.

“She was very excited,” Christy said. “She even told the NBHA people that that was her greatest barrel racing moment.”

Barrel racing is something of a family tradition, now. Charleigh’s mother had been barrel racing all her life when she passed the practice down to her daughter, then age 6. Christy said they usually practice three times a week, though school can often cut into her practice time.

“They’re weird, but very fun animals,” Charleigh said, “You have to at least clean their feet out once a week. You have to brush them. It takes a lot of work. … We have to feed them, every single morning. … At night, we put them in a barn, clean stalls and feed them. … brush them and talk to them.”

Charleigh said she races about twice a month year-round, though things slow down during the winter months. She’s looking forward to the Turkey Twerk 4-D Barrel Race in Meridian on Nov. 29.

“I’m proud of her accomplishments. She wakes up, the first thing out of her mouth is horse, and the time she goes to bed she talks horse,” Christy said. “She eats, sleeps, walks and talks horse. … I didn’t think anybody could love them more than me, but she does.”

The Mississippi School of the Arts recently announced the appointment of Debra Henderson Price of Brookhaven as its new principal... read more