With October comes cooler weather, pumpkin-flavored everything and the sometimes frightening fun of Halloween. To kick off the scary season, The Daily Leader decided to track down a few spooky stories — the most intriguing tales are the weird happenings witnessed by the City Cemetery Department.

Of course many may have heard the whispers of supposedly haunted places around town like the old King’s Daughters Hospital or a few homes that frightened tenant after tenant, but one may not have heard about some eerie happenings around many of Brookhaven’s graves. Cemetery Supervisor Wayne Williams said he experiences small, unexplainable events regularly. 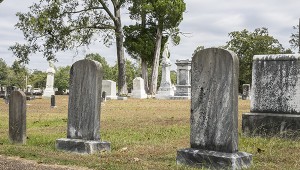 Photo by Kaitlin Mullins
City cemetery supervisor Wayne WIlliams says he sometimes gets visits from the late Hosner Cameron, who worked at the department for many years.

“I can be sitting here in the office and over on the other side, which is the shop [and] a bathroom […] also, you can hear someone slam the door, slammed very, very hard,” Williams said. “I can get up and go over there to see and nothing is in there — I’ve known no one was in there because I hit the clock [there before.] I’ll come back and be sitting here and it’ll go off again. So I’ll make the comment — the man who was here before I was here, his name was Hosner Cameron — I’ll say ‘Cameron, go lay down somewhere.’ And it would actually stop I wouldn’t hear it anymore.”

Hosner Cameron was working as the cemetery supervisor until he died on June 16, 2012. Williams has been with the cemetery for five years and took over for Cameron when he passed. Though Williams said he doesn’t believe in ghosts, supernatural spirits or similar superstitions, his account suggests Cameron might pay him visits on the job.

Williams said before he started, Cameron used to tell him about seeing people walk towards him in Rosehill Cemetery only to vanish. Cameron said he would see several apparitions and if he turned his head for a second they would disappear. Cameron also described an incident that happened in Rosehill before the cemetery office was moved to Easthaven Cemetery. Cameron was in the restroom when the door slammed so hard he actually thought someone was playing a joke on him only to find everyone was gone to lunch and he was the only person around.

“Before they moved this shop over here the same activity was happening in the shop,” Williams said. “The wind would slam the doors, and it could be a still day. But I never really paid it much mind, it doesn’t really bother me because I don’t believe in that. I thought it was just something he was putting on, but I experienced it for myself with the doors slamming and stuff happening over there that’s unexplainable. I can’t tell you what’s going on in that side when I’m in the office but I know there ain’t nobody here but me. I’ll make the statement ‘Cameron go lay down’ and I won’t hear it no more.”

The most significant experience Williams said was what he and another cemetery worker witnessed in broad daylight one day in Rosehill.

“There was a young man approaching us from the back — I thought it was one of the high school kids; he had backpack on, blue jeans and a white T-shirt. [He] was coming up toward me and when I got out of the truck I just turned around [to get] something off the truck and when I turned around the guy had just vanished,” Williams said.

“He was shocked also, he was ready to leave,” Williams said. “I’m looking like ‘Where did this fella go, there’s no way he could’ve just disappeared in the open cemetery.’ I couldn’t explain it. I told the other crew they’re like ‘Aw you’re just imagining it,’ — no. I was looking right at this guy. He just vanished right out of thin air  — there was nowhere to go. I’m telling you I could see all the way around the cemetery, and there wasn’t anywhere to go, nowhere to hide.”

It was the kind of thing that makes your hair stand on end, Williams said. But he knows what he saw and it wasn’t natural.

Williams said the most day-to-day eerie activity happens early in the morning. Quite often he said he will unlock the padlock to open the office in the morning to find the inside lights on. Williams said he is 100 percent sure to always turn the lights off when he leaves and there’s no explanation for the switches being on with no timer or sensor.

“I just hear strange noises a lot of time if something falls in there and I’ll say ‘Oh it’s probably a rat or something in there that’s knocked it over,’ but you never see a rat around here,” Williams said. “There’s always something moving over there like the crew is over there moving around and there ain’t a soul here but me.”