“She is a very valuable asset to us, behind the scenes especially,” Brookhaven Little Theatre Executive Director Greg Russell said of this year’s John Landress Award.

According to Russell, Brookhaven Little Theatre is the second oldest continuously running community theater in Mississippi. At one time, the group performed in various auditoriums and churches throughout Lincoln County, but they’ve since become a venue of their own. In 1982, BLT purchased the Haven Theater in downtown Brookhaven. 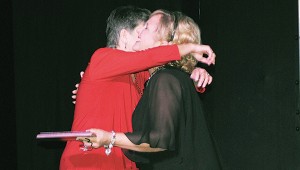 Photo by Aaron Paden
Sarah Lloyd, left, hugs Sherri Mathis after being named winner of the 2015 John Landress Award. Mathis was the 2014 recipient.

Russell said that winners of the Landress award must be active within BLT for at least 10 years. For 10 years, Lloyd has worked with BLT as an assistant director, a stage manager and a prompter. Lloyd started out as the prompter for BLT’s Children’s Theater Camp, but became more and more involved with the organization.

“They do a children’s drama camp, and … Jana Russell was in charge of it,” Lloyd said. “She called me one day and asked if I would come down and help that year with being the prompter. She said ‘all you’ve got to do it sit under the table and help prompt the kids’. … That’s how it all began, and then Sarah Underwood called me one day and said that she was about to direct her first play, and would I be her assistant director.”

Winning the award was a shock, according to Lloyd, because she isn’t comfortable getting in front of large crowds.

“And I kept saying, ‘But I don’t even act!’ … Sherri that presented it to me, she’s a very gifted actress. All of them down there are so talented. It was an emotional moment.”

“One day we’re going talk her onto being on stage, and that’s going change her life,” Russell said.

Lloyd attributes her love of the theater to one of her high school teachers, Harriet Kuykendall, who took her students to New Stage Theatre.

“I knew when I left there that I was hooked. It began my love of the theater, but it also helped me as a teacher, because I knew the way that she taught was something that appealed to me, and I wanted to pass that on to my students – and that was hands-on teaching. It wasn’t just a textbook.”

Lloyd said that she is very impressed with Brookhaven Little Theatre.

“They have the Children’s Drama Camp, and from that, it blossoms into the [BLTeens] … I just think that says a lot, that they’re looking towards the future, and they’re reeling these kids in at an early age. Brookhaven Little Theater is going to benefit from that, and I believe anywhere that these young people move to, if they get involved in theaters in those communities, they’re going to benefit them, because these people in this town, they are very, very talented.

“My reward is just being able to sit back and watch the tremendous talent that this town has,” she said.

(AP) – Seven new cases of West Nile virus have been confirmed in Mississippi, including one in Copiah County, bringing... read more