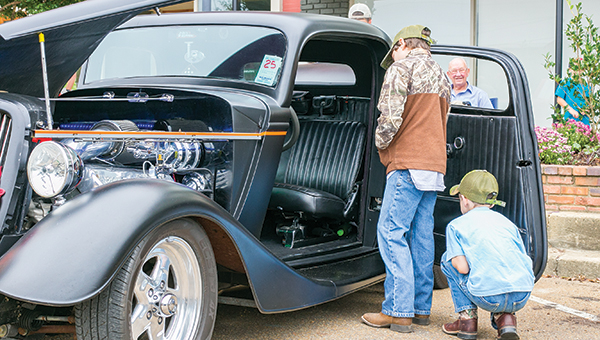 Photo by Kaitlin Mullins
Two young car enthusiasts inspect a vehicle at the Ole Brook Festival Car Show — a crowd favorite this past weekend. This year the car show accepted the most entries in the history of the festival, one of many aspects of the festival that made it a success.

The Ole Brook Festival this past weekend drew thousands to the downtown area including approximately 50 more vendors than last year and the most car show entries in the history of the festival.

Hampton Sims, co-chair of the committee over the festival, said based on early estimates attendance edged last year’s number. Sims said they sought to appeal to the handmade and unique arts and crafts vendors and saw the greatest growth in that regard with over 60 entries, 25 of which were new vendors.

“Definitely a success,” Sims said. “The weather was the first cool snap and everyone seemed to love enjoying a break from the heat and stayed to enjoy more of the festival.”

Brookhaven-Lincoln County Chamber of Commerce Executive Director Garrick Combs said the food area in the south railroad parking lot sold out of allotted spaces several days before the event. He also said every assigned vendor space on both sides of Whitworth Avenue were filled and all but a handful of spaces on the west end of Cherokee were filled.

“We consider it a great success. We want downtown to be filled with people walking from Friday night to Saturday afternoon,” Combs said. “We want people to come out and enjoy our downtown, the entertainment, the food and we want to be known as a great family festival with something for each member of the family.”

Making the kids’ area more accessible with a greater variety of activities for all ages was one thing the committee sought to and did improve, Sims said.

Tommy Smith spearheaded the Ole Brook Festival Car Show and had the most entries in the festival’s history. It again proved to be a crowd favorite, Sims said.

“We also brought the stage in earlier Friday to have live entertainment on Friday evening with some of the best local musicians Brookhaven has to offer,” Sims said. “The Friday evening concert called ‘The Shady Side Live’ had a decent crowd and the entertainment for both Friday and Saturday organized by Tyler Bridge was phenomenal.”

Combs said in discussing every detail of the festival, the committee addresses and tweaks things here and there to make things run more smoothly. This year’s festival did run smoothly, Combs said, thanks to the dedicated team in charge.

Combs said the event would not be possible without the committee co-chairs Sims and Marty Stroud and all of the volunteers who work from Friday night and all day Saturday are irreplaceable.

“Our sponsors make this event happen (including The Daily Leader) — without them we could not do this,” Combs said. “The Brookhaven Police Department is great to us and provides tons of assistance. The city public works and street departments work for days in advance leading up to the festival to make sure we are prepared.”

“We also encourage people to follow the festival online at www.Facebook.com/OleBrookFest for information on next year’s dates and important festival information.”

City, county under burn ban: Ban in effect until Nov. 2 without exemptions

The Lincoln County Board of Supervisors and the Mississippi Forestry Commission have enacted a burn ban with no exemptions for... read more