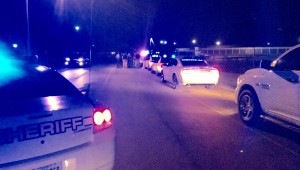 Police on the scene.

11:59: The man who fired dozens of shots at officers during an hours-long standoff at a Brookhaven apartment complex is dead, Police Chief Bobby Bell said at about midnight.

Police arrived on scene at Brookhaven Apartments at about 6:30 Monday evening. The suspect, who has not been identified by police, reportedly wouldn’t leave the apartment after being evicted.
There were conflicting reports about an officer being injured during the incident. Bell said all officers were OK.
We will provide more details as they become available.
——–

10:35: The suspect is not in custody. Loud sounds coming from scene.

Police chief: The suspect is still in the apartment but isn’t shooting at this time.

An electric company truck has arrived on scene.

SWAT has arrived on scene.

Police say the suspect is firing a weapon. Two distinct gunshot sounds have been heard – either the suspect has more than one weapon or the suspect and officers are exchanging gunfire. 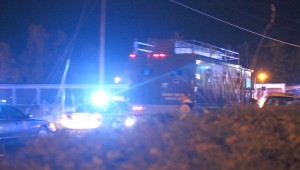 The suspect allegedly made racist threats against other residents.

Residents on scene say the suspect had been evicted but wouldn’t leave.

Police are currently negotiating with suspect in the apartment.

Law enforcement is on scene at a Union Street apartment complex — Brookhaven Apartments — because a man is barricaded inside.

Authorities confirmed that shots were fired. Police Chief Bobby Bell said no one has been injured.

We will update the story as we gather more info.