POLICE CHIEF: I FELT THAT HE WASN’T GOING TO COME OUT 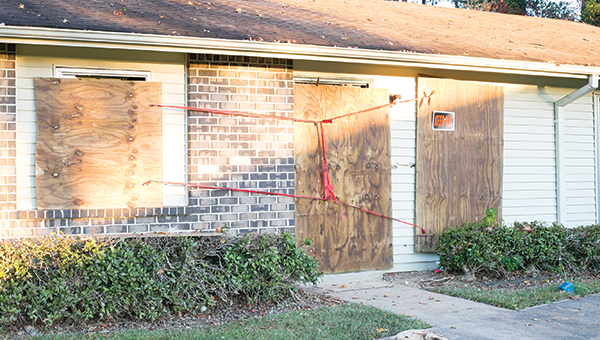 Photos by
Kaitlin Mullins
The apartment where a suspect holed up in an hours long-standoff Monday has been boarded up.

“I never experienced anything like it, but I felt in my heart from the start that he wasn’t going to come out,” Brookhaven Police Chief Bobby Bell said about Monday’s fatal standoff.

Bell addressed the mayor and Board of Aldermen Tuesday afternoon during a special meeting.

Rudolph “Toby” Smith, 31, had been making threats all day, Bell said, reportedly after receiving eviction papers at an apartment complex off Union Street Ext. Police responded to a call at 5:24 p.m. that the subject was threatening other tenants and displaying a gun. When officers arrived on the scene to talk to the man, he discharged his weapon at them through his apartment door. Then began the hours-long standoff that ended with the young father’s death.

“Some of y’all might not have known, he had a brain injury at one point,” said Alderman Ward 5 Fletcher Grice. “That’s no excuse, but you take that on top of other things that were going on in his life, and it — you called it right, he was not going to quit.” 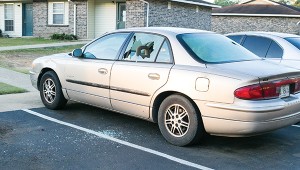 Several cars were struck by the suspect’s bullets.

Smith was severely injured in a hit-and-run on I-55 in 2004. Smith and his girlfriend were injured when Smith’s truck was side-swiped by an 18-wheeler. Family members said then that Smith sustained severe head trauma, a concussion and broken vertebra in several places.

Bell talked about the series of events that unfolded after officers arrived at Brookhaven Apartments No. 42 Monday evening.

“At that time, they called for backup,” Bell said. “We had MHP respond, the SWAT team responded and we came up with a plan to try and talk this young man out. His parents showed up at the scene, and they called him and texted him for awhile trying to get him to come out. We advised him that no harm had been done to the officers and that we would give him to a facility and have him checked out and make sure everything was going good with him mentally — and he just refused.”

“Shooting at cars and other buildings. Shots were ricocheting all over the place, then he would stop, and all of a sudden he would start again,” Bell said. “We determined that we were going to have to try and get him out, so basically we called Entergy to try and control the lights. We had the water cut off in case if we were to shoot some tear gas in there he wouldn’t have a way to wash his eyes and things like that. Heavy fire came on officers when they drove a car around.”

It was then that the glass from the windshield shattered and went into the commander’s eye, Bell said. Two officers received minor injuries during the standoff.

Bell also explained why the lights down the street at North Haven Apartments were cut off.

“We cut them off at North Haven because you could see people up there,” he said. “People just, like the people at Brookhaven Apartments, they want to see. They don’t want to get out of the way. So we had to get the lights cut off up there because when he saw lights he started shooting at the lights.”

Bell said officers went as long as they could, trying to talk Smith out of it. Bell said at one point they thought Smith might drink enough of the moonshine he said he had and come out, but it never happened. Bell said they then did what they thought was necessary.

“At about 11:40 p.m., they succeeded in putting tear gas in the house,” Bell said. “When the tear gas was put in the house, he tried to exit through the back door, started firing at the officers and the officers fired back. That’s where he died.”

“There are several rumors that he had been making racial statements all day long as he carried his gun,” he said. “But, you know, racial statements or whatever, it looked like he had made up in his mind that he was going to die that night. And that’s pretty much what he told us and his parents.”

Bell said all efforts were made to solve the situation in a peaceful order, and that all the agencies that responded were instrumental in the resolution.

“I can’t do anything but praise them for coming so [quickly to] help us,” he said. “Sheriff’s Department, also. The sheriff was great, his men were great.”

The police chief then spoke about his own department, and how well his officers handled the daunting circumstances.

“All mine were fine. I’m so proud of mine,” Bell said. “The way they conducted themselves, and knew exactly what to do. I’m proud of them. I just hate it for the guy’s family, I just hate it when anybody gets hurt or killed, but we just didn’t have any other choice in this matter.”

Bell said he had to call all of his officers in so that there were police patrolling the streets while all of the on-duty officers were at the scene.

The mayor and the board praised the job done by all parties involved, expressed gratitude that the outcome was not much worse and that no officers — or bystanders — were seriously hurt or killed.

“Like I tell people, my officers do a great job, and some of them go out of their way to do the right thing, and this is another thing that we actually had no control over,” Bell said. “We just have to accept these things and pray about them, and hope they change. You want to believe things are going to get better, but the way you see things going all over the country, you know it’s not going to get better any time soon. The only thing we can do is pray and hope that things change.”

Mayor Joe Cox read the city’s statement about the event at Tuesday’s meeting, which was placed on the official minutes:

“This was a most unfortunate incident here in Brookhaven last night. Thanks to the Brookhaven Police Department, Lincoln County Sheriff’s department, MS Bureau of Narcotics and the MS Highway Patrol for their professionalism in handling the situation — they took control of a bad situation and handled it.

“Law enforcement made every effort to get Mr. Smith out alive. It saddens me that our hometown has been touched with tragedy that so many other cities now experience. I am grateful, however, that other than a minor injury to one of our officers, and the MHP commander, that no officers or bystanders were seriously wounded or killed.

“Our thoughts and prayers go out to the deceased’s family, but also to the families of the officers, and to the officers themselves, who put their lives on the line to protect our community.”

Spooky decorations a tradition for couple