Spooky decorations a tradition for couple

“Decorating, watching scary movies and carving pumpkins on Halloween,” Tracy McGuffee said about her October traditions. “And would eating candy be considered a tradition?”

October is the month for all things spooky, and for the past five years Greg and Tracy McGuffee have gotten into the spirit of the season by decorating their Brookhaven house for Halloween.

There are spiders, tomb stones, and the Grim Reaper running over an evil clown with a lawnmower. Freddy Krueger looks out one window and Jason Voorhees looks out the other. 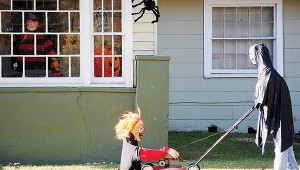 Photo by
Aaron Paden
Greg and Tracy McGuffee’s house is decorated with an assortment of spooky items.

“It usually takes us about two to three days to decorate the inside of the porch and the outside,” Tracy said. “The huge spider on the house came from Pinterest, but my husband modified it with materials he had access to. I also saw the coffin online, and he spent the better part of a day making it for me. We used fence pickets from Home Depot for the wood for the coffin. The two homemade tombstones he made with old pallets that we painted grey and I designed them giving a nod to a couple of my favorite shows, “The Walking Dead” and “Breaking Bad.”

The Grim Reaper and the clown, Tracy said, was her husband’s idea.

“He’s an evil genius, what can I say? We knew we were going to do something with dummies, and we were bouncing ideas off of each other, and he needed something that would actually hold Reaper up to look more realistic, we had a lawn mower. Lots of folks hate clowns, why not run one over with it?”

“I just like the whole idea of Halloween, kind of like spooky make believe comes to life in October. I just enjoy watching all the cars slow down every year to see what we’ve come up with this time.”

Two Brookhaven students were chosen by their local electric cooperatives to participate in the Electric Power Associations of Mississippi Youth... read more