A new organization calling itself Friends of the Brookhaven City Shelter has a plan to re-imagine animal control in the community, but they need help.

“We are going to be operating on a shoestring,” organizer Lu Becker said. “The city has been wonderful in supporting this project. They have literally put it in the hands of these Friends of the Brookhaven City Shelter, so yes. We have enough for room to begin, that’s all. Just enough to begin.”

The shelter will need a lot of work to improve living conditions for dogs left in Brookhaven’s streets, starting with a new attitude. 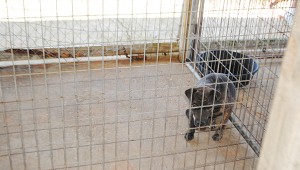 Photo by Aaron Paden
A dog looks out from a kennel at the shelter Wednesday. A new organization, Friends of the Brookhaven City Shelter, will soon begin work on improving the facility.

Currently, the facility is open to the elements. The group plans on putting up a wall to shelter the animals from winter winds, planting trees for shade, and replacing all of the kennels. There has been no office and no procedure for adopting abandoned animals. Becker hopes to change that.

“It will be a complete overhaul. It’s going to be a transformation.”

Preparing the dogs for adoption requires expensive vaccinations that protect the animals and the people around them from dangerous diseases like rabies. To do all this and maintain the staff required to handle adoptions, Becker said they are going to need to bring in a portable building to serve as an office, but cost is an issue.

Becker is in high hopes that they can improve the shelter for dogs, but cautions that there are currently no accommodations for other kinds of animals.

The shelter currently is home to one horse, but Becker said that was only out of desperation, and that they thankfully had someone in line to adopt him before winter.

Becker said Friends of the Brookhaven City Shelter is currently looking for volunteers and donations. Two volunteers from the Brookhaven Animal Rescue League have offered their services to teach Friends how to run the facilities.

“[Volunteers will] do computer work, [and] socialize with the animals,” Becker said. “We’ll be teaching these animals to sit, and not jump up on you. They’ll be well-mannered when they’re ready to be adopted out. We’ll have people handling them.”

The city allocated $20,000 to improve conditions at the shelter. Becker, with BARL, said the funds would not be enough to bring it up to BARL standards, but rather humane standards. The city shelter and BARL will continue to be separate entities as city shelters are legally required to provide euthanasia.

BFD hopes to scare up funds for equipment: Event at Exchange Club Park scheduled for Oct. 31

The Brookhaven Fire Department has teamed up with the Exchange Club to host Halloween in the Park on Oct. 31... read more