Vietnam veterans were honored Tuesday at a luncheon commemorating the 50th anniversary of the war at Pleasant Hill Baptist Church in Bogue Chitto.

The commemoration, hosted by the Chloe Holt chapter of Daughters of the American Revolution, is part of a larger event lasting until 2025, covering the whole period of the Vietnam War.

“The commemoration focuses on specifically thanking our 7.2 million living Vietnam veterans, and the 9 million who went on to serve in the Vietnam war period,” Chloe Holt Regent Caitie Boatwright said. 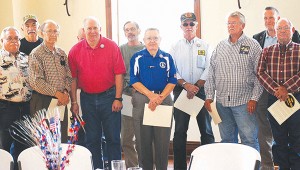 Photo by Aaron Paden
Vietnam veterans were honored during a luncheon Tuesday at Pleasant Hill Baptist Church. These men were given the opportunity to share their stories about what it was like to serve in Vietnam. The commemoration was hosted by the Chloe Holt chapter of Daughters of the American Revolution.

Griffin said he spent a lot of time on training missions.

“We flew those airplanes off some 700-foot dirt strips. They weren’t supposed to fly off of them, but we did it, and took [artillery] spotters with us, so they could look,” he said. “This was actually for training missions. We were training the Vietnamese in Vietnam. I didn’t actually enter any combat situations at all, fortunately. I didn’t really want to.”

Griffin said he was closest to the fighting when there was a coup near by, but it didn’t affect his base.

Afterward, Griffin said he spent five years testing missiles that were interfaced to an analog computer.

“We’d try to see what we could do to make that missile miss the target, so we actually had missile hardware we were flying in the lab. It was a very interesting program. That was pretty much my career in the Air Force.”

“I joined the Navy to get out of the Army,” Bullock said. “The Navy seemed to have better advancement opportunities, that sort of thing.”

Bullock said he was originally stationed in Jacksonville, Florida, where they went south of Africa and through the Indian Ocean and eventually landed in the Philippines. There he worked on ejection seats and other safety features for A7-E aircraft.

“About three months into the cruise, they decided to move me up to the flight deck, where I joined the bomb loading crew,” Bullock said. “I don’t know how much you’ve seen about working on the flight deck of an aircraft carrier, but it’s dangerous when there isn’t any bombs around. When you add bombs, which are pretty heavy little things, it gets a little dicey up there.”

After the war, Bullock said he stayed in the Navy.

“I was on active duty for eight years 11 months, and then I went into the reserves,” Bullock said. “While on reserves I worked on P3 antisubmarine aircraft and C130 transport aircraft. I finally retired in 2002 as a Senior Chief Petty Officer. It’s a good life. God has been good to me, and the Navy was good to me.”

Finally, Marc Gatlin with the Air Force related his experiences.

“At the time, I don’t believe I thought I was doing anything special,” Gatlin said. “I still don’t believe my service was an inconvenience to me.”

Gatlin was drafted in 1969, but because he was going to Copah-Lincoln Community College at the time, he could continue for another three years. Gatlin said he took that opportunity to marry his wife before going into active duty in 1972, where he worked as a medical laboratory technician at Shaw Air Force Base.

“We would have blood drives,” Gatlin said. “We’d call out on the base and say ‘as many as you can, come and we’re going to draw as much blood as we can to send to Vietnam.’ We’d line the tables with people. We’d put them on anything we could find, and we may draw two or three hundred units of blood in one day.”

After Shaw, Gatlin said he was moved to Keesler, which was a staging area for people returning from Vietnam.

“We would keep the most ill patients, the ones who had interior pathogens or something kind of biological illness, and the ones who were burned badly or wounded very badly, we would send of to Lackland Air Force Base,” he said.

“I got to admit, that I got to see a lot of people in the field I was in, injured. I don’t know how many you saw, I saw a lot, because of the situation, and just flying them in, but I never did have to put my life on the line. I’m very thankful for those who did, and I just thankful to be a brother to you guys who actually served, and who had to put your feet on the ground in Vietnam.”

Veterans who gathered at the event were given buttons and certificates in honor of their service.