Why are there gravel holes coming into town on First
Street? Does the city plan to fix them? 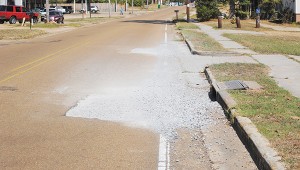 Photo by Aaron Paden
The sewer under First Street partially collapsed, and the city is currently spend about $1 million to replace it.

According to WGK Engineer Mike McKenzie, the holes will be filled.

“We’re doing a sewer rehab job in that whole area, spending right around a million dollars — I’m not sure on the exact number — but there was a partial collapse of the sewer line in that location, so they had to replace it,” McKenzie said. “If you’re heading north on First Street, heading into town, then the project area is over to your right. It’s several streets back over in that whole area. Basically that whole neighborhood there. Lots of streets — St. George, Center, Minnesota, Chippewa, some on Chickasaw — generally it’s a large area in there that we’re rehabbing the sewer system, and there’s several places if you drive down in that neighborhood that I’ve just described, you’ll see several gravel holes like that.”

McKenzie estimated that the project will probably go on to the first of next year or longer, but that the holes will likely be filled before then. Suncoast Infrastructure Inc., the contractor for this project, still needs to start re-lining existing pipes.

Taste of the Trust returns to downtown: Brookhaven Trust fundraiser to be held Nov. 12

In just three weeks, the annual Taste of the Trust will take place in downtown Brookhaven. On Nov. 12, from... read more