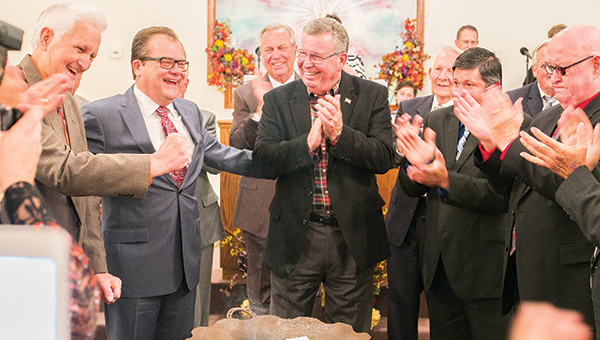 Photos by Kaitlin Mullins
Rev. David Tipton (left) and Jack Rutland, senior vice president of State Bank in Brookhaven (center), surrounded by other local Pentecostal leaders, join to burn the note for the $23,000 loan balance on the First United Pentecostal Church of Wesson, which was paid in full as its founding pastor Rev. Lloyd Thompson’s last wish.

“The Miracle on the Hill” is how members fondly refer to the First United Pentecostal Church of Wesson, and small miracles were in no short supply during its note burning on Thursday evening. For this congregation, paying off the note for the church they built isn’t just an accomplishment, it’s a wish come true.

FUPC of Wesson was founded in 1988 by Rev. and Mrs. Lloyd Thompson and held its first service in the old “Wesson Café” building on Spring Street. Members began a building fund toward a new church of their own and 11 and a half years later, the dream was a reality. Land was purchased and the new building was started in 1998 on Slyvarena Road. A year later its first service was held and in 2000 formal dedication services were held. Construction of the educational building began in 2005 and now includes six Sunday school rooms, a youth area, gym, a large kitchen and fellowship hall.

In June 2014, 26 years after the church was founded, its steadfast leader was diagnosed with cancer. Thompson, facing staggering conditions, set his eyes on paying off the loan on the church as his “Make-A-Wish.” Rev. James F. Nations started “Project Twenty-Three,” named for the $23,000 loan balance on the church and began raising funds to alleviate it. 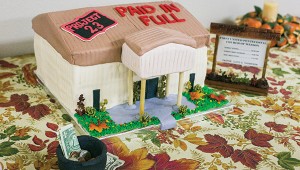 “We had probably 200 people here, many ministers and friends who came from all over the state to make this a night of celebration, to burn the church note and to allow the church to be debt free,” Nations said. “Because it was his wish, his Make-A-Wish, because he knew he was ill and wasn’t really able to get out and continue to raise the money so we took it on ourselves to make a project to do it. It was great because there are people here tonight from all over the state of Mississippi that have come to share in the celebration.”

Members call their church “The Miracle on the Hill” because of the many sources from which God provided funds and donations for its construction.

“A large illuminated cross and a high-flying American flag beckon to travelers in the night as a place of refuge and safety,” a FUPCW publication reads. “The cross shines in God’s honor and for his glory as a symbol that dreams will become reality if one does not give up and never loses faith in God’s promises.”

On Sept. 15 of this year, First United Pentecostal Church of Wesson paid the loan on the church in full. In recent weeks, Thompson’s condition has declined, but the congregation has been able to grant his request while he is still considered pastor of his church. This was celebrated in a joyous note-burning celebration Thursday night. While Thompson could not attend, many family members represented him as the congregation hosted a number of local church and Mississippi United Pentecostal Church International district leaders who gathered to honor, remember and celebrate Thompson and the amazing accomplishment his faithful flock made possible.

Stories illustrating Thompson’s character echoed from each speaker and the love the people there have for their pastor was palpable. Friends and fellow ministers and leaders joked about how each thought they were special because Thompson called them “Slim,” only to realize he calls everyone that. Sister Tiffanye Givens and praise singers led enthusiastic musical accompaniment to support the service. It was clear to any bystander the inspired influence of this man touched his congregation deeply, enough to rally together to make miracles of their own.

“Brother Thompson loves very deeply. He loves God, he loves his family, his church, the Mississippi District United Pentecostal Church, he loves this message of truth,” said Reverend James Carney, current Presbyter Section 10. “He loves preachers and people, and in return, brother Thompson is greatly loved. He’s a man of action, he’s been a man of vision and a man of great faith even in the time of sickness.”

Rev. David Tipton, current MSUPCI District Superintendent, together with the church’s banker who became close with Thompson over their decades-long relationship, initiated the burning of the note. Because of the statewide burn ban, the precious flames were kept indoors in front of the altar of “The Miracle on the Hill.”