Conference both entertaining and educational 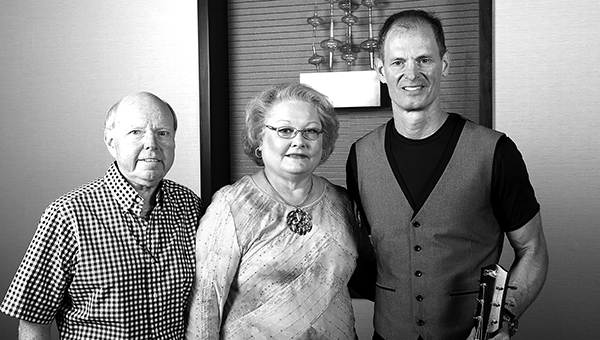 Photo submitted / Terry and Jane Leary (from left) of Smith Jewelry in Brookhaven attended a semi-annual conference in Nashville where they met the keynote speaker (right) Mike Rayburn.

Terry and Jane Leary of Smith Jewelry in Brookhaven recently attended the semi-annual conference of the Independent Jewelers Organization held at the Omni Hotel and Music City Center in Nashville, where they had the opportunity to enjoy the dynamic presentation of keynote Mike Rayburn. In Mike’s “What if?” address he uses his world-class guitar talents and hilarious comedy to teach the three simple, powerful tools which took him from playing empty bars to headlining at Carnegie Hall (eight times). They work for anyone and everyone.

“Mike was extraordinary. He was so entertaining, but he delivered an important message,” Leary said. “He feels we’re our own worst enemies when it comes to creativity, and that managing change is not only stupid, it’s dangerous. We must learn how to stop managing change and start creating change — how to define the curve rather than follow it. We were all so energized by him — while enjoying hiss hilarity and feeling awe at his incredible talent!”

“We put a great deal of effort and expense into providing inspirational speakers at our conference, and the feedback is always very positive. We knew Mike would be good — he came highly recommended — but he really hit it out of the park. He’s right up there at the top of the list of favorites!”

While in Nashville, Leary attended a series of educational seminars on important industry-related topics, as well as viewing the newest and latest jewelry styles exhibited by almost 200 designers and manufacturers. To see what Smith Jewelry has in stock for the fall and holiday season, stop by 105 West Cherokee Street in Brookhaven.