Police: Slow down near school: Officers worry about high speeds near Mamie Martin

Growing concerns from the Brookhaven Police Department about the safety of students around Mamie Martin Elementary led to new school speed zone signage that was installed Wednesday.

“So that parents can slow it down in the mornings and evenings when they’re picking up those kids,” Bell said. “We had some signs put up making people aware of the speed limit during school time.” 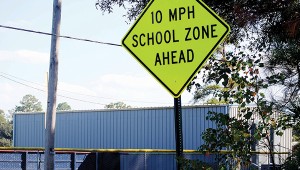 Bell said some drivers are heading to Mamie Martin going 30 to 35 mph — way too fast — especially around children walking across from Fred Walley Drive. Thankfully, Bell said, the signs weren’t put up in response to an accident, but police feel it could be only a matter of time.

“We have officers out patrolling in the morning and evening, and they’re just so scared there’s going to be an accident because the rate of speed the parents come up the street,” Bell said.

To help keep students from walking in Ingram Street, and per Ward 6 Alderman David Phillips’ recommendation, a previously gravel area on the Mamie Martin side of the street was asphalted to create a small walkway.

“Alderman Phillips put in another walkway for the kids to walk across,” Bell said. “Just another safety mechanism Phillips added, so when they come across they have something to get out of the way of main traffic.”

The Mississippi Bureau of Investigation is looking for a man considered armed and dangerous who was last seen in Brookhaven. ... read more