BLT founding member John Landress, 89, died in his home Sunday. Landress was a World War II veteran, a puppeteer, a teacher and for 47 years he was a mentor at BLT. 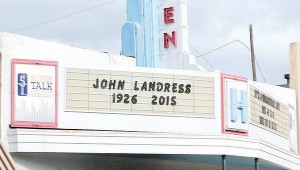 “Anything I know about theater, I know through Brookhaven Little Theatre, and John Landress is probably 80 percent of that,” BLT President James Minter said. “If the people that were in his plays would all come to just one show, we probably don’t have enough seats for them.”

Minter and Russell both described Landress as a jack-of-all trades who could teach people how to build a stage and teach them how to act. Minter said while he expected the cast to work hard, he was also kind and patient.

“I had a severe case of stage fright when I first got involved in Little Theatre. He must have seen something in me because he encouraged me to continue,” said Minter.

Minter said he also met his wife Sue Minter at his first play in 1982, directed by Landress. Since 1985, Brookhaven Little Theatre has given the John Landress Award to members who have been with them 10 years or longer and have shown a deep involvement in the organization.

“In [2005], we decided to honor him further, and we named the auditorium in his honor,” Russell said. “The John Landress Auditorium at the historic Haven Theater in beautiful downtown Brookhaven.”

Visitation for Landress will be at 5 p.m. Wednesday at Sylvarena Baptist Church on 1119 Old Sylvarena Road in Wesson. Services will be held at the church on 10 a.m. the next day.

This time of year brings more shopping and with it, more shoplifters — there were seven shoplifting arrests in Brookhaven... read more