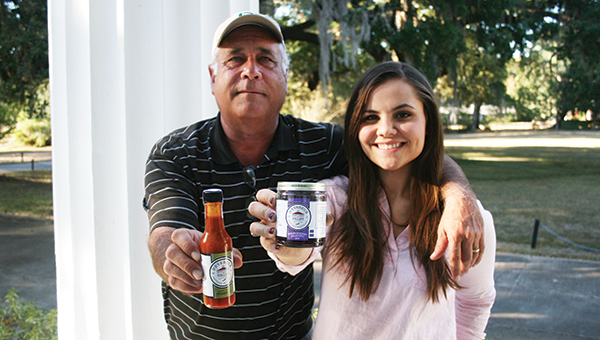 Photos submitted
D’Evereux Foods owner Ashleigh Aldridge, pictured here with her dad Courtney Aldridge, has had reason to celebrate as her gourmet pepper jams made in Natchez were named one of Oprah’s Favorite Things for the 2015 holiday season. The jams, Huckleberry Jalapeno, Sweet Pepper Jalapeno and Strawberry Jalapeno, can be seen in O, The Oprah Magazine and on Amazon.com.

Brookhaven businesswoman Ashleigh Aldridge, owner of D’Evereux Foods, LLC, was at a trade show in Atlanta when Oprah Winfrey’s assistants came by her booth and tried her pepper jams. They were scouting for the ultimate holiday and shopping institution — Oprah’s Favorite Things — when they requested Aldridge send samples to Winfrey herself.

“I went around with their business card in my pocket for two weeks saying that I had the golden ticket,” Aldridge said laughingly. “Now I have it framed.”

As a young business owner with a marketing degree, Aldridge said she knew she hit the jackpot. Making it on to Oprah’s Favorite Things list is pretty much the holy grail of the retail world. Tens of thousands of hopefuls send samples hoping for a shot at the list and it truly is like winning the lottery to be selected.

Every day since the announcement, D’Evereaux’s gourmet jam set has been the No. 1 new release in jams, jellies and preserves on Amazon.com — a list that is determined daily. Alridge said before Nov. 4, the products’ website would have about 2,600 hits a day. The next day, the website racked up 50,000 hits. Her sales have increased around 130 percent in the past two weeks and with the exposure on top of the busy Christmas season approaching, Aldridge increased her production by just a little over 1,700 percent.

Aldridge has had time to let the excitement sink in. She has known the jams made Oprah’s list since October but had to keep it under wraps until Nov. 5, with the magazine hitting stands on Nov. 10. It’s all still pretty surreal, Aldridge said, “Two years ago, I was in college. I’ve only been in business about a year and a half.”

A young company, D’Evereux Foods operated as a “cottage industry,” unsure what it would amount to until August 2014 when business began taking off. Now, Aldridge is the sole owner and operator of a company with more than 120 retailers in more than 20 states and two countries. There are also 39 cities in Mississippi that carry the sauce and other products in more than 70 locations. Four of the locations are right here in Brookhaven, at both Piggly Wiggly locations, Country Meat Market on 550 and K&B Seafood.

The success of D’Evereux Foods has been hard earned. Aldridge now works seven days a week, usually from the 6 a.m. commute to Natchez to quitting time around 14 hours later. Aldridge said she “works like none other now to live like none other later,” and her dedication reflects her high ambition.

Aldridge said she’s been through a roller coaster of emotions since the announcement, though she was expecting more ups and downs. Only a couple of times, she said, did she have stressful days of worrying if she was going to be able to live up to the production level with such a long list of things to be done.

“The choice is you can let it consume you and say ‘At least I did this today, got one thing done.’ Or you can say ‘Well I know what happens when I quit, what happens if I don’t quit and try harder?’”

Aldridge said what’s next for D’evereux Foods will be new products launching in early 2016. The future is bright for the Brookhaven businesswoman and is sure to be filled with the quality heat that makes D’Evereux Foods so many folks’ favorite things.

Reed’s Metals gives back this holiday: Local business to donate roof to family in need

In a project Reed’s Metals is calling “Covering the Community,” the company plans to give away a metal roof to... read more