Adding compassion to the job 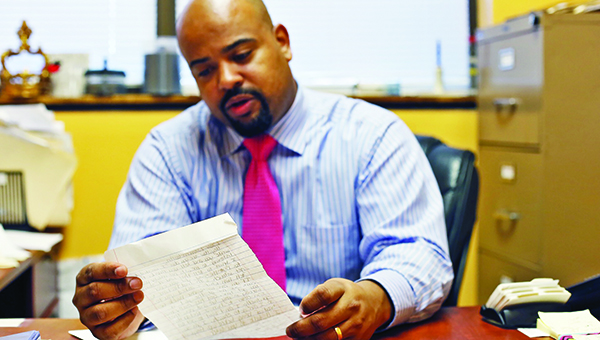 Photo by Kaitlin Mullins / Master Sgt. Damian Gatlin reads a thank-you letter from a former inmate describing her appreciation for the time he took to listen to and encourage her.

Master Sgt. Damian Gatlin is one of those not-so-rare but incredibly special law enforcement officers who defy tarnished reputations by showing the altruistic nature of those who protect and serve.

Gatlin, 36, has been with the Lincoln County Sheriff’s Office for almost eight years. He started in dispatch and quickly started moving up the ladder. He was the chaplain of his class in the academy and played the National Anthem at graduation in 2009, after which he was a deputy. Gatlin said Sheriff Steve Rushing and Chief Deputy Johnny Hall Jr. must have seen something in him, and he was given the opportunity in investigations as a master sergeant in 2011.

Now, his biggest challenge is making sure cases don’t become cold, though he isn’t much on paperwork or court. He prefers to be in the field working with people, but it is not a walk in the park.

“If you can’t deal with being screamed at, hollered at, sometimes cussed out — this ain’t for you,” he said.

Because it happens, Gatlin said. At any given moment a routine interaction can put an officer in danger and they have to react quickly. Not just fight the urge to run away from bullets but to react in a way that neutralizes the situation without anyone getting hurt. Gatlin said it takes a certain type of person, a certain nerve and a combination of being calm and efficient under pressure.

Unfortunately, Gatlin said, it’s understandable how officers can get rattled while being assaulted by someone. Gatlin said there are situations that could be handled with less aggression. It seems there is an observable gray area between excusing and condemning an officer’s reaction when it would be a natural response for anyone else. With the amount of law enforcement officers, someone is bound to make a mistake.

And so there is tension and mistrust. Gatlin said he enjoys changing the mindset that people have about law enforcement, and he tries to demonstrate that there is a human under the uniform — one no different from the suspect or offender.

“I try to be very respectful and not prey upon that feeling of fear, but at the same time I have to be stern because my life is at stake, because I don’t know you from Adam,” Gatlin said. “We’re human, too, and just like you’d be afraid to walk up to a car at night not knowing if there might be somebody in there — that feeling — I just want to explain that.”

Like so many in law enforcement, Gatlin was drawn to the profession because he wants to help people. Gatlin said when civilians can understand the fear, put themselves in the officers’ shoes and realize they truly want to help, the trust and relationship between law enforcement and public can improve.

“The honest-to-God truth, I love helping people. Beyond cases, even with the people I arrest I find myself spending time with them. Some people say unnecessary time because it’s not pertinent to the case but just to deal with maybe some of their hurts, some of their pain — just to do what I can to just help them process the situation and help them have a better outlook,” he said.

Gatlin said he believes God put him in the position to make a difference in the lives of the people he encounters. Encouraging those who have been arrested or jailed is one of the best aspects of the job. This altruistic approach to his work has earned him a reputation as an exceptional role model. This past July, the Boys and Girls Club of Southwest Mississippi honored Gatlin with an award that reads: “Your achievements provide an inspiring example to Club members that dedication and hard work will enable them to achieve a great future.”

“I feel like this is my job, but I have a work to do as well,” Gatlin said. “And in the process of doing this job I get to do some of my work as well, and I’m happy about that.”

Mentoring is the real work that fulfills Gatlin. He said he has contemplated aspirations of leading an agency one day, but for now he is focused on getting better at his job so he can carry out his work.

“For whatever reason God extended me that grace that I get to be in the position I am today, to be here for you. I’m here for you,” he said.

Gatlin has been married to his wife, Kelly, for 16 years, and they have four children: Landon, 15; Ian, 10; Ghavin, 7; and Kayleigh, 21 months. Whenever he isn’t investigating county crime, he can be found playing paintball with the kids or playing trumpet at a social function. An entertaining, upbeat person, he was in the James Brown movie “Get On Up” with the “‘fro that made the front page,” and has a great story he likes telling about a robbery his son Landon spotted. Gatlin is an associate minister at East Fernwood M.B. Church in Fernwood.

All aboard the Quest Cruise ship: Sixth-graders show off projects from gifted program