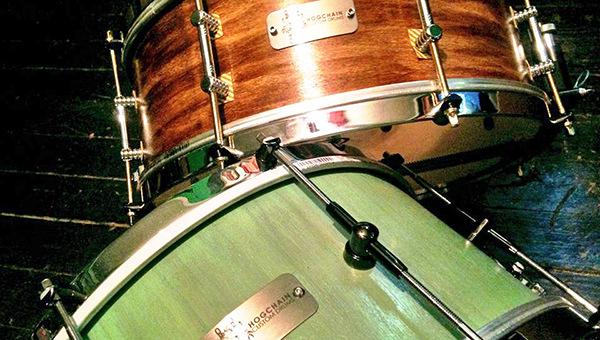 Photo submitted / Hogchain Custom Drums owner and Brookhaven musician Brodie Davis turned his love for the drums and woodworking into a successful business. Davis has made drums for a few of his idols, and won a prestigious competition in Nashville.

The story of Brookhaven native Brodie Davis and his custom drums illustrates that success in business is sometimes only a by-product of the pursuit of happiness. Drum player turned drum crafter, Davis and his niche business, Hogchain Custom Drums, have proven they can compete with the best of them.

Davis started playing drums when he was 12. Already familiar with woodworking, one of his first passions, it seemed natural to evolve to building drums as he got older.

“Over the years as I got better at drums I became more picky about the gear I used. And I always admired it, looked on at other guys building and was interested in it,” Davis said. “There was a couple-year span where I went and bought three different $2,000-plus drum kits, and all of them had serious flaws. I’d want something and you can’t get that exact thing in a full package, so you have to settle — can’t order what you want really.”

Davis, who just turned 30, started building when he was about 24. In the beginning he was practicing his craft mostly for friends, fun and in his free time, but within six months he had a six- to eight-week waiting period. Hogchain Custom Drums has 27,001 followers on Facebook.

“I’ve sent drums to a few idols of mine, which was really cool,” Davis said.

Davis did custom work for Chris Dickinson of the North Mississippi Allstars, one of the most well-known blues bands performing these days. Davis also made a drum for Thomas Pridgen, former drummer for the band The Mars Volta, though he is most well-known for his drumming ability and teaching clinics.

He also developed a relationship with powerhouse instrument company Orange Amplifiers out of Atlanta, and built some themed snare drums for them. Working with Orange just about tripled his business, Davis said. 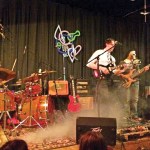 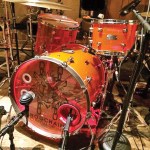 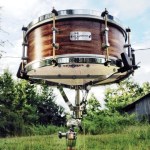 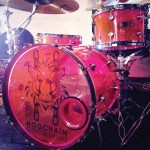 Most of his orders are for snare drums, though he does entire drum kits as well. His drums are 100 percent handmade, which Davis said lets him have complete control to create the quality so often lacking in assembly line-made drums. They are made of usually walnut, maple, or both, and are hand-stained. Since they are made completely by hand, musicians may order drums to their exact specifications, any size and any color.

“That’s one thing that threw me off about buying drums,” Davis said. “I’ve got to choose this particular configuration whereas when you get older you’re trying different things. So with me you can order what you want to start with. And it’s all American-made. I will not touch hardwood that isn’t grown in America, nor will a piece of metal go on it that isn’t made in America.”

Davis’s “Heritage Hog” drum is a maple and walnut signature design with a vintage feel that ended up winning the Snare Drum Olympics held in Nashville, Tennessee. Hosted by National Drum Show and Not So Modern Drummer magazine, 40 drum companies participated in the competition.

“I’m going up against the people that gave me tips and helped me get started, role models of mine,” Davis said. “I was like, If I get top 10 I’ll be stoked. And then it turns out I won — I was like oh my goodness never expected this.”

During the competition, professional drummers play the instruments and discuss them. “They were so happy about that drum, more than any of the other ones you could tell. They were smiling — I did not expect that.”

These days, Davis is at the point he wanted to be when he started, doing it for fun and picking what he wants to do. He is careful not to spread himself too thin.

“I’ll never stop building drums, ever,” Davis said. “I look for it to just be fun and steady, what I meant to do from the beginning. Being able to choose what I want to build, stay at a steady pace and keep it in Brookhaven is what I want to do.”

While the fun, the accolades and the business are great, Davis said the best thing to come out of his drum building are the relationships he’s made.

“Really the biggest thing to me to ever come out of it are the relationships,” Davis said. “I’ve got lifelong friends because of it and so many things I wouldn’t have been able to do without them.”

In the aftermath of a fire that destroyed District 4 Supervisor Eddie Brown’s home, Brown and his family have found... read more