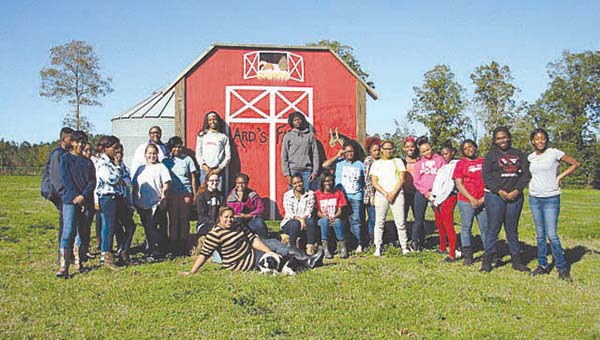 Learning where food comes from is an important lesson for anyone, but especially for those who plan to cook for a living one day.

Kristen Williams, teacher of Culinary Arts at Brookhaven Technical Center, has taken the responsibility of ensuring that students know the source of what they find in the grocery store, and how to serve and prepare it safely. In an attempt to better understand the food process, Culinary Arts students took a field trip to Ard’s Dairy Farm in Ruth recently.

“My students need to have the opportunity to see where food comes from,” Williams said. “They need to understand their past in order to look forward to their future. I thought it would be a great experience for them to learn about cows. You see the milk, but you don’t know where the milk is coming from. You don’t know about the process that it goes through to make sure it’s at safe levels for you, which is the pasteurization process. You need to understand what you’re dealing with. When you’re able to understand what you’re dealing with, you’re better able to use it properly.”

Williams said it was also a good opportunity to engage with students and help them gain perspective.

“Some of my students have never seen cows,” Williams said. “They’ve never been out in the country. Also, [they learned] that goats produced milk and things like that, so it exposed them to different avenues. It showed them the process, and how difficult it could be at times. They taught us the different responsibilities people go through actually running a farm, so I think it was a really good experience for them. I think they enjoyed it. It opens your eyes up to see what people have to go through to give you the things you’re fortunately blessed with.”

Part of the field trip was learning about the pasteurization process, where milk is heated to kill off microorganisms. Williams said it’s critical for students to learn proper food handling.

“The food handling is what’s putting you in danger,” Williams said. “If they’re leaving the food out at improper temperatures for long periods of time, that causes bacteria to grow. The second thing is to learn how to properly cook the food. When you properly heat the milk, that helps to kill bacteria. We also know that bacteria don’t necessarily die right off, but it puts them at a safer level. There are good bacteria and bad bacteria.

“We eat cheese. Cheese is bacteria. I hate to say it like that, but it is.”

Williams said she also plans to take students to local restaurants to observe the business first-hand. Williams said she’s been trying to get local businesses involved in the process.

“I feel like if you’re going to be on that side one day, you need to know what to do, and what not to do. Through them seeing it from both sides, it helps them to be a better individual and more effective worker.”

Williams is working on her third year at Brookhaven Technical Center. She said her method of teaching is to go beyond the four walls of the classroom and expose the students to as much as she can.

“I love it,” Williams said. “I want my students to go to the next level. Any way that I can find avenues for them to go higher, that’s what I want to do. Even if they don’t go into my particular field, I still want them to take those nuggets of wisdom wherever they go.”

Cupstid Bail and a preliminary hearing have been set for the man charged with the death of his live-in girlfriend... read more