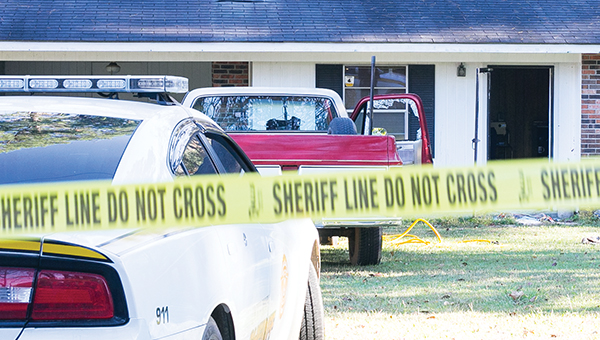 Photo by Kaitlin Mullins/
The scene at 421 River Road Drive after Lincoln County Sheriff’s deputies attempted to serve a warrant to Christopher Hamilton, 40. Hamilton shot at deputies, who returned fire.

A Bogue Chitto man was shot by Lincoln County sheriff’s deputies Thursday after reportedly firing at them while they attempted to serve a warrant, Sheriff Steve Rushing said.

Rushing said Christopher L. Hamilton, 40, was being served a warrant for indictment for felony child abuse and a warrant for a firearm owned by a convicted felon at 1:04 p.m.

Rushing said Hamilton reportedly fired a rifle at officers after they made initial contact with him at the residence at 421 River Road Drive. Deputies returned fire. Rushing said Hamilton was hit in the arm during the incident. According to deputies on the scene, he was wounded on his side as well, and the arm was visibly broken.

Hamilton was on the phone with his sister, Selena Hamilton, when deputies got on the phone with him. Rushing said deputies learned he had been injured and that he was willing to cooperate. At this point, Mississippi Highway Patrol and Mississippi Bureau of Narcotics joined deputies who had secured the perimeter. They went in with shields to secure him and take him into custody.

He was transported by ambulance to King’s Daughters Medical Center at about 2:20 p.m. No officers were hurt. Rushing said Hamilton was stable after surgery Thursday night.

As is protocol for any officer-involved shooting, the Mississippi Bureau of Investigation will handle the case. As MBI finishes the investigation, additional charges will be filed against Hamilton.

There were reports of a school being placed on lockdown due to the shooting, but according to Bogue Chitto, Loyd Star and Lincoln County School District officials, that did not happen.

A LCSD official said Loyd Star entered into a routine “safety mode” or “safety drill.” The Loyd Star Attendance Center Facebook page posted Thursday that “Loyd Star was placed on a temporary lockdown for approximately 15 minutes this afternoon due an incident that police were responding to that took place in a nearby community. This was strictly a precautionary drill and no students were in danger at any time.”

Loyd Star Principal Robin Case described the reaction not as a lockdown but rather that the school used the incident in Bogue Chitto as an opportunity to practice a safe mode drill. In lockdown, children are moved to secure locations. The safe mode drill, Case said, is making sure all faculty and staff are accounted for and where they’re supposed to be as well as making sure doors into the school are locked.

“One of my primary goals is to make sure children are safe,” Case said. “We don’t do an excess of those drills because it can cause alarm. We used the opportunity to make sure if it were a situation close to us that everything was in order, and I’m happy to report it was.”

Beginning tonight, the Brookhaven Little Theatre will present its take on a Christmas classic, “It’s a Wonderful Life.” The play,... read more