Family lights up the holiday season 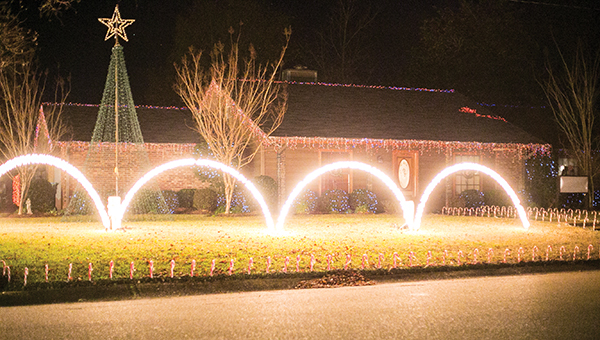 Photo by Kaitlin Mullins/
The synchronized Christmas light display on Tanglewood Drive attracts admirers Monday night. Sunday through Thursday, the lights run from 5:15 until 9:30 p.m. and from 5:15 until 10 p.m. on Fridays and Saturdays.

Tanglewood is twinkling again, and this year the Williamsons hope their carefully curated Christmas light display will also shed some light on more than the neighborhood — namely, Duchenne muscular dystrophy.

Many have come to know, love and expect the elaborate display of Christmas lights coordinated for the eighth year by the Williamson family of 632 Tanglewood Drive.

The entire light display is motion synchronized to songs the Williamsons broadcast from a low-power radio transmitter. For those driving by, enjoying the show is as simple as tuning in to 87.9 FM.

After discovering something of a tip in their mailbox “for the light bill,” from an admirer of the lights, the idea of a donation box came to Celeste and Carey Williamson. They have raised around $2,000 each year since they started, all for the organization Parent Project Muscular Dystrophy. Duchenne muscular dystrophy is the most fatal genetic disorder diagnosed in childhood, according to the PPMD, and it affects the Williamson family.

Duchenne affects approximately 1 in every 3,500 male births and results in a progressive loss of strength affecting all muscles in the body. The muscle weakness leads to serious issues relating to the heart and lungs, and there is no cure – yet. This time of year, donations to the PPMD organization are typically matched, so the donations go twice as far to fund early-stage research that could benefit every family affected by Duchenne.

“I feel like it’s not just because our family is affected, it’s because there are other families affected, and we’re aware of what that’s like,” Celeste said. “Parent Project Muscular Dystrophy supports all the other children and young adults who have this disorder. Our lights are a great platform for us to educate the community on the disorder, and we’re able to give a little something back.”

The Williamsons’ display has come a long way from the couple’s love of lights.

“We both have always liked Christmas lights,” said Celeste. “Even in our childhood that was just something Carey and I both enjoyed.”

Over the years, others have enjoyed it too.

“Each year we get different reactions and comments,” Celeste said. “[Such as] ‘I come to your house every year and my kids really love to come see the lights’ – which is fun. It’s wonderful to be a part of other families’ Christmas traditions.”

And a particular part of the annual light display that has become a family tradition for the Williamsons is the tech-y side of programming the lights to music.

“Our 12-year-old son programmed our addition this year. He spent several weeks of programming. It’s not a Christmas song, but we felt like it fit in,” Celeste said. “It’s ‘Like a Match’ by Tobymac, that was the song he chose. He spent probably eight or nine hours programming 20 seconds here and there and he finished it in time for the start of the show. Audrey programmed a few years ago, too, so now it’s kind of like a milestone in our family; to pick a song and program it.”