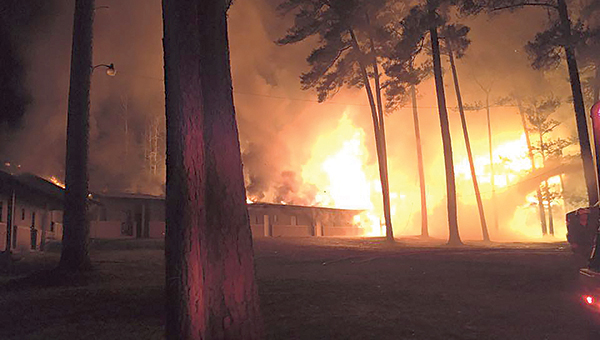 The Dixie Springs Cafe in Summit, known as much for its atmosphere as its food, was destroyed in an early morning fire Monday.

The fire at the restaurant on Hwy. 51 was reported at about 4 a.m. No injuries were reported.

Summit Fire Chief Stan McMorris said when the department arrived on the scene, it was fully involved. He said it was a total loss. ”We are still on the scene trying to clean it up, we got it out as best we can tell,” McMorris said Monday. “It’s an historic site, been in business for a number of years and it’s a sad day here in Dixie Springs today.”

Fire crews set up a water draft out of the nearby lake to help extinguish the flames, McMorris said.

The locally owned restaurant served both Pike and Lincoln counties for 75 years and was known for its steaks. The crawfish dip was also a crowd favorite.

The atmosphere was as much of an attraction as the food. Long-time waiters and waitresses knew customers by name and it was a favorite place for rehearsal dinners, private parties and receptions.

Until Brookhaven passed a referendum allowing alcohol sales in 2013, Dixie Springs Cafe was one of the closest places to get a drink.

Kristine wrote on Facebook along with a photo of the burned restaurant: “End of an era — our hearts are broken.” Others mourned the loss of the restaurant on Facebook.

Sharon Spanial wrote: “In 1996 I fell in love with my soulmate there. He was a vet that I lost 3 years ago to PTSD! We often went back for our anniversary…At least I still have my memories!”

Dale Gray wrote: “I celebrated my first birthday in the US there after moving here from South Korea. My husband and I were just there the other night.”

The restaurant and bar were originally located across the street from its current location, according to the Enterprise-Journal. A fire led to the relocation of the cafe to its current address.

Bernie Ebbers, who was eventually sentenced to 25 years in 2005, showed up at Dixie Springs Cafe the night he was fired as CEO of WorldCom, according to media reports at the time.

“Ebbers and his wife showed up at Dixie Springs the night he was fired as CEO, the day after he pleaded the Fifth Amendment before Congress and days before the board considered revoking his severance package earlier this month,” USA Today reported. “Except to jokingly ask for a job after he was fired, Ebbers never brought up his WorldCom problems,” co-owner Joe Kimmel said at the time.