Fighting fires: Local gives back through passion for career 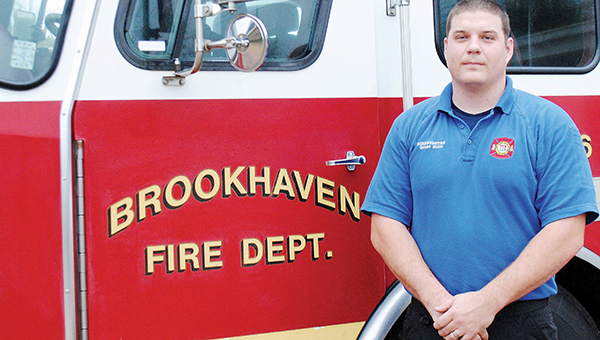 Photo by Aaron Paden / Grant Britt helps the community by building a career at the Brookhaven Fire Department.

“It was a huge adrenaline rush,” Brookhaven firefighter Grant Britt said about his first house fire. “We got in there and the back side of the house was fully involved. We got in there and kept it contained to where it was already at and extinguished the fire. It’s a good feeling to know that you did something for somebody. If we wouldn’t have got in there when we did, the whole place probably would have burned down.”

Near the railroad tracks at fire station No. 2 on Willard Street, Britt, 25, takes shifts waiting for a call. If there is a fire or an accident, Britt may be called to save a life or property.

Britt said he was looking for a job that would be suitable as a career and also have a positive influence on the community, and that’s why he chose firefighting.

“I enjoy everything that goes along with the job. It’s good to have a job that’s appreciated and go home at the end of the day and feel good about what you did. That’s the main thing,” Britt said.

Britt said becoming a firefighter starts with the Candidate Physical Ability Test. After that, Britt spent seven weeks at the fire academy, but the real training is on the job.

“Really, in school, they just teach you a very basic way to keep yourself safe on a fire scene or any kind of emergency call,” Britt said. “You really don’t start learning until you get in there and get some experience fighting fires under your belt.”

On the scene of an emergency, Britt said there’s no time for him to get nervous or over-think his actions.

Since joining the fire department, Britt said he’s learned to have a deep respect for the families of those lost in an emergency.

“Whether it’s in a fire or a car wreck, your heart just goes out to the victim’s families because you’ve seen it first hand,” Britt said. “It hits home with you when you’ve seen the loss of a loved one on scene.”